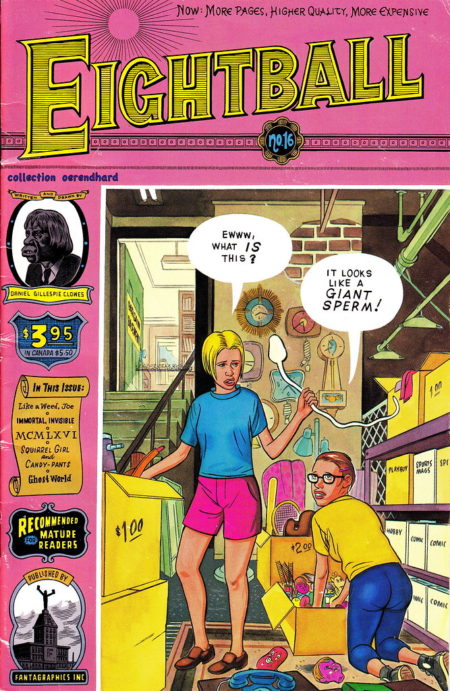 Fantagraphics published the 16th issue of Daniel Clowes’s Eightball in November 1995. By that point, I’d been playing catch up — grabbing back issues where I could find them and waiting patiently for new ones. Everything about this issue, from the paper quality, to the artwork, to the stories themselves, felt solid and more grounded than its predecessors. To me it was a high peak in the series’ run. MORE PAGES, HIGHER QUALITY, MORE EXPENSIVE warns a cover burst: it was well worth it.

From the “Ghost World” installment to the semi-autobiographical stories “Like a Weed, Joe” and “Immortal, Invisible,” to the endpaper adventures of Squirrel Girl and Candy Pants, the book is filled to capacity. This, despite the reserved cover — a warm pink background, tasteful lettering, bits of decorative flourish and Enid and Becky from “Ghost World” in soft, hand-painted gouache.

Nearly a quarter of a century later I’d have to say that my favorite story in this issue is still “MCMLXVI (1966).” It’s one of the funniest things Clowes has ever written. But maybe you had to be there? I lived in Portland, Oregon, in 1995; I was surrounded by 20somethings preoccupied with retro cool. The narrator of “MCMLXVI,” believes he was born about 20 years too late — and that everyone around him is a fool for not understanding that the height of American culture was in 1966. Clowes has it both ways with this guy, allowing him to point out some of the genuine dissatisfaction of the mid-90s, while also demonstrating how silly obsessive stubbornness can be. The character found a persona and stuck with it. As he confidently states his position to the reader, we watch as he squirms uncomfortably in the actual world he’s trapped in. Clowes’s observations are spot on, and embellished by rich detail and dry humor at its most subtle.

I never took particularly good care of my comics, I’m proud to say. Many of them, especially ones from my early childhood, are absolutely destroyed from use. Somehow, though, Eightball #16 has survived unblemished. Is it because of the HIGHER QUALITY Fantagraphics splurged for? Maybe. But I think it’s also because every time I’ve picked it up, I’ve treated this issue reverentially. In doing so I’m preserving a treasured period from my past, not to mention the moment that I believe an incredibly talented storyteller and artist hit his stride.