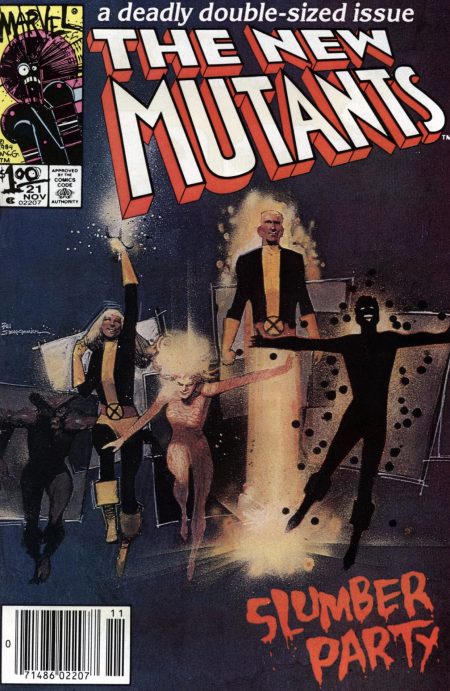 I bought my first comic books ever in early 1987, at Robinson News convenience store in Malden, Massachusetts, off an old-school comic rack. They were two issues of Uncanny X-Men. They were a great entry to comics, but I was also confounded by the detailed continuity I’d been dropped into. Soon I began going to New England Comics in nearby Malden Square to delve into their glorious boxes full of back issues. I discovered that there were nearly 25 years of X-Men comics, and that this intricate continuity was full of departed (sometimes dead!) team members, romantic relationships and breakups, and titanic world-shaking battles… sometimes all in the same narrative arc!

My weekly allowance permitted me two or three back issues at a time, and inevitably I found the many spinoff X-titles. The one I fell head over heels in love with was The New Mutants. The junior team at the X-Men’s academy in upstate New York, the New Mutants were outcasts gathered from all across the globe (much like the “all-new, all-different” X-Men back in 1975) taught to control their powers by the X-Men’s founder, Professor Charles Xavier.

But it was the double-sized “Slumber Party!” issue that hooked me. Here were ordinary teenagers doing ordinary teenager things — gossiping, talking about their crushes and feelings — but with the added appeal of a super-powered fight with a misunderstood alien lifeform (future New Mutant Warlock). Ultimately it was the teen drama and not the super-powered fights that kept me reading. Other teens my age might have had shows like 90210 or Degrassi Junior High, but my guide to surviving the coming turbulence of adolescence were those delightfully angst-filled thought bubbles penned by Claremont.

I identified with two New Mutants in particular: conservative religious New Mutant Rahne Sinclair (Wolfsbane) and resident “nerd” Doug Ramsey (Cypher). I didn’t have super-strength like Sunspot, I couldn’t fly like Cannonball, but Doug’s feelings of uselessness over his geeky powers (deciphering any language or code), coupled with his shyness as he slowly fell for Rahne, hit me on a gut level. The fact that Doug later became the first New Mutant to die (readers apparently hated him), a mere year after I first started collecting the X-titles, was probably the beginning of the end of my junior high-era love affair with comics.

Marvel mutants’ powers typically emerge at puberty, and I’m certainly not the first person to note how accurate that metaphor is for the hormone-fueled madness of one’s teenage years. The New Mutants provided me with vivid archetypes that allowed me to safely explore growing up, not understanding myself or my feelings, being in love… and loss.