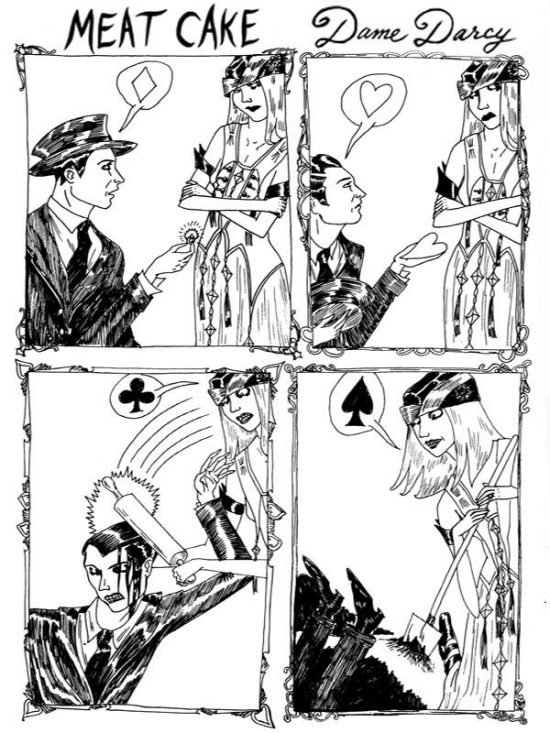 The trail of breadcrumbs that drew me to Meat Cake (1993-2008) began in my childhood. Whenever possible I would retreat from the sunburnt, athletic environment of 1980s Australian suburbia into my own private world. Peer inside my thoughts and you would have seen me as I imagined myself: an adventuring heroine, a kind of cross between Laura Ingalls Wilder and Frida Kahlo. This identity had come out of an obsession with witches, fortune-tellers, girl-orphans and girl-adventurers, figures who carried an aura of secret power about them.

When, years later, I came upon Dame Darcy‘s comics, first in the zine Rollerderby and then her Fantagraphics comic Meat Cake, I recognised that she had this same power. She lived and created a real-life fairytale and I fell into the world of Meat Cake as if it was an adjacent planet. Its cast of ebullient, ghoulish girls wore stripy stockings and ruffled petticoats, and lived in a Neo-Victorian world of haunted houses, parties, excursions to the graveyard, sex and death, cake and dolls.

Dame Darcy drew Meat Cake in such a way that the figures gleamed with a satiny, diamond brilliance. The lines had a scrimshaw intensity, a profusion of thin wisps which trailed and wavered, or twined together like a locks of hair in a memento mori. Each panel was bordered by filigree patterns, which seemed to grow and move under my eyes.

The characters had a vital energy too: Effluvia the mermaid, the feisty heroine Richard Dirt, the undead cad Wax Wolf, and my favourite, Strega Pez, who communicated by inscriptions on lozenges of candy that issued from her slit throat. These characters revelled in life’s cruelty and ghoulishness, were devious and kind and playful in equal measure. The photographs of Dame Darcy printed on the back covers showed a woman with long blonde hair, wearing Victorian clothes, with pale cheeks and red lips, as if she was an envoy from the world of Meat Cake, as well as its creator.

That Meat Cake was a world that overlapped with the real one gave the comics a thrilling intimacy. On the back pages of the comic were advertisements for Dame Darcy’s ancillary services: palm reading (“curious about love? money? travel? searching for illicit thrills? … send a clear xerox of the palm you write with…”), hand-made dolls, and episodes of her public access tv show, Turn of the Century. But which century? The year 2000 was coming up soon, and Meat Cake had prepared me. With it I’d learnt to harness my wildest, strangest creative energies, and use them as a source of power. I had my striped stockings on, my spell book in my pocket, and was ready to follow Dame Darcy over to the other side.