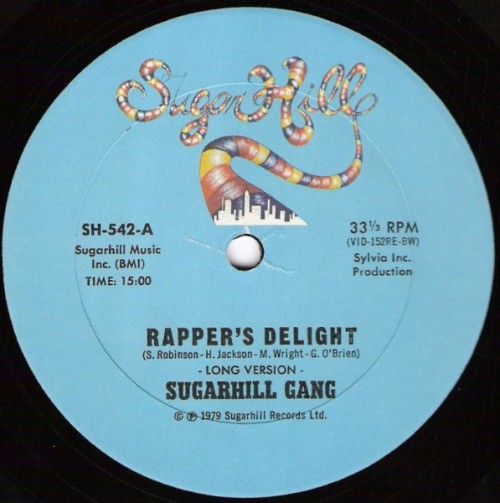 Second in a series of posts analyzing and celebrating old-school hip hop.

I got bodyguards, I got two big cars that definitely ain’t the wack
I got a Lincoln Continental and a sunroof Cadillac
So after school, I take a dip in the pool which is really on the wall
I got a color TV so I can see the Knicks play basketball

If you grew up in New York in the 1970s, the first rap song you heard on the radio was probably “Rapper’s Delight.” The extended version of the song was exactly like what you would hear during the summer at a park jam, where the electricity went in and out and the police rolled thru to shut everything down. But this was the realness. Radio was the legitimacy to the dream is what we squarely believed. The dream was to escape from poverty. Rap was aspirational music to the fullest. Sure. gospel is also aspirational music but who the hell wants to die just to get to heaven. Rap was going to heaven right here on Earth.

Big Bank Hank’s verse is incredibly, ridiculously aspirational. He has two cars. The Lincoln Continental was good enough by itself. No one would front on you if you drove that down the block, but then he also has a Caddy with a sunroof. Hank is balling and shot calling. And then after school he takes a dip in the pool. I love that he is still going to school with all of his wealth. This man still has priorities. And how would you know how to keep your pool chlorinated without an education. The fact that pool is on the wall defying the laws of gravity doesn’t bother me too much. Maybe Hank hasn’t taken a physics class yet?

But then the ultimate in luxury is having a color TV. This line rings out louder to me than any other. I enjoyed the black and white television in my parent’s house. It had a decent picture. The antennae had broken off so my dad stuck a coat hanger in its place and the dial to change channels had broken too so I had to use a vicegrip, but it worked fine otherwise. Rap music meant I didn’t have to be poor any longer. My poetic prowess could earn me a swimming pool on my wall.

“Rapper’s Delight” is leagues away from the gangsterism which would come to dominate the themes of rap songs a decade later when the audience for rap wanted to be able to go on a ghetto safari from the safety of their Sony Walkmen. When rap music was directed at the earholes of those of us in the ghetto we didn’t need to hear how rough and tumble things were in the streets because we lived there everyday. We wanted to hear the songs about swimming pools on ceilings and color televisions in every room. We wanted music with aspirations of something better in life.

See All Posts by Dallas Penn

Dallas Penn is the creator and editor-in-chief of the daily weblog dallaspenn.com. He is also a founding member of the film-making collective Internets Celebrities. Dallas is known for his contributions to various hip-hop websites and publications, including Mass Appeal, XXL Magazine, and The Source.