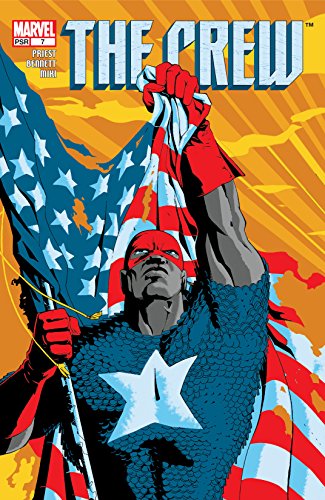 The truth is, with every yesterday you live through, the future has come and gone. Pop-culture is full of alternate pathways these days, as we learn more about quantum possibility, get nearer to social or ecological armageddon, consider our choices and contemplate what outcomes we’ve got left. The parallel timelines now common to comics have run out for James Rhodes when The Crew opens in 2003; for this character, an aging and suddenly bankrupt former Iron Man (“Rhodey” from the movies), the future is now, and there’s nothing but end in sight.

The Crew’s writer, Christopher Priest, knew that nothing can be counted on to last forever; this comic ran for seven issues and was slated for cancellation before the first one came out. Marvel’s first Black writer and editor, he left comics for a decade after this disappointment, but the fight he fought in this book is one I’ve never forgotten. It starts after an ending; Rhodes has lost his corporate empire and he’s called in to a local precinct when his addicted sister turns up murdered. My addicted sister had died a few years before (unlike Rhodes’, by her own accidental hand); the mix of sorrow and anger in the survivors is one of the many shames you don’t know what to do with, and when a cop asks Rhodes if there’s anyone who would’ve wanted to kill his sister, and he answers, “Other than me?”, it was for me a freeing acknowledgement of the reactions you can have, and a sobering reminder of what that can look like.

Rhodes goes on a vengeful quest against the gang she got involved with, dealing violence with what’s left of his armored battle tech; the intensity of the combat is better than facing his conflicted feelings. Other people outside his head care about making their neighborhood safer (or just making their lives more secure); his and their purposes cross in the course of the series, but they all walk roads (hmm) of trauma — biracial cop and Black Panther protégé “Kasper” Cole (an outlier to every group he moves in), paranoid former South American secret-police op Danny Vincent aka “Junta” (who exists in a weird field of distorted gravity to match his unsteady moral grounding), and Josiah X, local Muslim minister and secretly superpowered son of “the Black Captain America” (Isaiah Bradley, on whom the government’s “super soldier serum” was first tested, and whose career was erased while his health and freedom were taken).

Alongside Brian Michael Bendis’ work with artists Alex Maleev and Michael Gaydos in the early 2000s, this book is the unacknowledged blueprint for the stark tone and shadowy sophistication of all the Marvel Netflix series; Priest and artist Joe Bennett saw a future that got closed off at the time. When we last see Rhodes, at his sister’s gravesite, the cop from the beginning says, “She meant a lot to you,” and he tells her, “No. But she should have”; he admitted something about himself while I learned something from what he said out loud. There are truths that keep us going on, even in what ends much too soon.