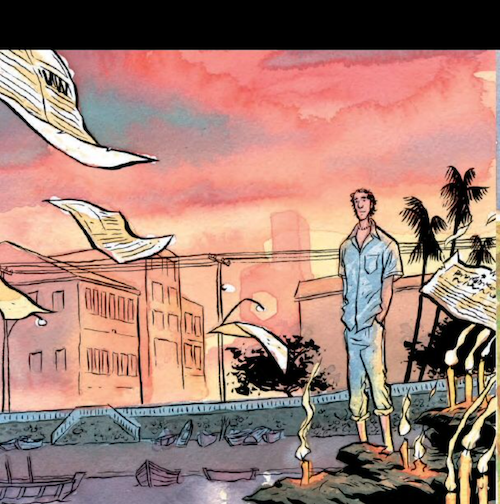 ​One of my favorite things to do in New York City is to go to comic book stores with my son. Since life is too short to waste it on a bad book, I usually ask the people working there for recommendations. One of the best among these was Fábio Moon and Gabriel Bá’s Daytripper, published in 2011. It truly was one of my most memorable experiences with a comic book or graphic literature. The book tells the many possible lives of Brás de Oliva Domingos, a Brazilian man who encounters his death at the end of each chapter. This is not a spoiler. Brás’s many deaths, which come as a result of different circumstances, are not the point of his stories. Moon and Bá explore Brás’s relationships, jobs, dreams, frustrations, and joys throughout his many lives. Although death inevitably awaits, Daytripper is about what it means to live and those whom we choose as company along the way.

​Moon and Bá’s artwork has a naïve quality to it. Furthermore, Dave Stuart’s coloring and Sean Konot’s lettering remind me of the simplicity of comic strips in newspapers. Yet the stories they capture, which range from Brás as an eleven-year-old child visiting his family in the countryside to his friendship as an adult with the larger-than-life Jorge, reflect a depth that always moves me. We read about Brás getting his first kiss under a tree, falling in love, having his first child, trying to help a friend, and writing his first novel. Throughout his stories, death is constantly in Brás’s mind since he mostly writes obituaries for a newspaper. And the reader knows that at the end of each one, Brás will die. The book does not sugarcoat this grim reality, but the artwork is a constant reminder of the protagonist’s innocent gaze as he takes on every new experience with inspiring curiosity.

I do most of my comic-book reading on the subway to take my mind off the morning trek to work or the dreaded afternoon rush hour. Daytripper helped me cope with the discomforts and hassles of daily life in the city by transporting me to Brazil. The book has a great sense of space. Moon and Bá do not draw Brazil as an exotic location, but as a lived site of quiet city streets, of country houses overflowing with family members, of small bars where you can drink a cup of black coffee or buy a pack of cigarettes. (The aural personality of New York City is the ideal soundtrack to read this book.) But the artists also show the reader a Brazil of dreams that is filled with visual references to Candomblé, the Afro-Brazilian religious tradition that is present in the culture. Moon and Bá’s Daytripper is one of those transcendental books that you must read at least once in your life so that you can learn to live while waiting to die dreaming of Brazil. ​

See All Posts by Juan Recondo

Juan Recondo is an Adjunct Lecturer at the City University of New York and New York University. He teaches Latinx Theatre, Latin American Theatre, English Composition, and Public Speaking. His main fields of research are Latinx and Latin American Theatre and Performance, Black Cinema, and Postcolonial Theory. He is in the process of publishing his dissertation, The Other at War: Performing the Spanish-Cuban-American War on U.S. and Cuban Stages. ​