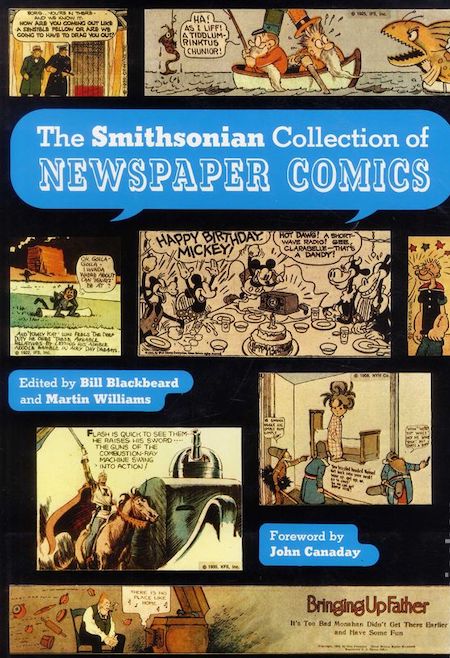 THE SMITHSONIAN COLLECTION OF NEWSPAPER COMICS

In 1978, I was 19 years old, and preparing to move out of my parents’ house. I had dropped out of college the year before, after one semester, dealing a virtual death blow to my Jewish mom and dad (Mom: “I thought you wanted a Phi Beta Kappa key? How are you going to get one if you’re not in college?” Karen: “If it’s meant to happen, it’ll happen” — hey, it was the ’70s), and was working in a convenience store. A co-worker and I decided to get an apartment together, along with a friend of his, who had just been released from prison for grand theft auto.

It was not a high point in my life.

I was still a member of the Smithsonian Institute, though, getting my monthly magazine, when one day I got a mailer advertising a new publication, The Smithsonian Collection of Newspaper Comics, edited by Bill Blackbeard. “I like newspaper comics!” I said to myself, and this was true. I was a sucker for the funnies and for New Yorker cartoons. So I sent off for this book, with no real understanding of what I was getting.

When the Very Large Parcel arrived, I opened the box, and opened the book, and opened my mind. I’d never heard of R.F. Outcault or Winsor McCay before. I knew George Herriman only from his archy and mehitabel illustrations (I’d bought a paperback collection in high school), and Krazy Kat only from the unimpressive animated cartoons, which firmly gendered Krazy as female.

I turned page after page. Jimmy Swinnerton! Lyonel Feininger! Frederic Opper! Johnny Gruelle! Bud Fisher when Mutt and Jeff was still funny! The first several pages were riotous Sunday strips from the 1900s and 1910s, and I had never seen anything like them before. It wasn’t just the quaint historicity — although that was a factor; I was already a huge fan of pre-Code Hollywood film — it was the uncontained creativity. Crazed characters, psychedelic colors, inventive panel layouts, not to mention the fight clouds, fer Pete’s sake. Raised on my own newspaper’s Mary Worth and Funky Winkerbean, these strips were a complete revelation. Reading this book from beginning to end was the equivalent of watching the comics medium be invented, right before my eyes.

Over the years, I would pull down this huge volume and consume it again and again, from Hogan’s Alley to Doonesbury. I’d discover old friends: oh, look! The New Yorker’s Rea Irvin is in there! And there’s Peter Newell from The Slant Book! The mind-bending comic art of those early strips prepared me for my next big love affair, with the European cartoonists of Heavy Metal. And when, after I returned to college (getting that Phi Beta Kappa key, Mom), then grad school, then library school, and started to wonder what was happening with comics… well, that brought me to the job I have now.

See All Posts by Karen Green

Karen Green is the Curator for Comics and Cartoons in Columbia University's Rare Book & Manuscript Library.