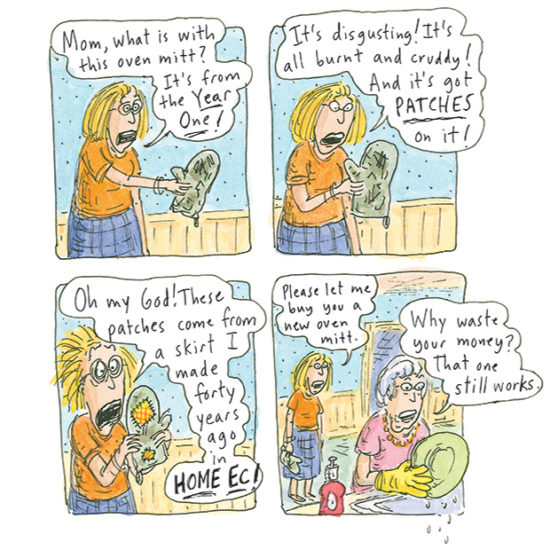 In 2014, Roz Chast published Can’t We Talk About Something More Pleasant?, a memoir about her aging parents and her raw, dark feelings about being a caregiver. My father had been recently diagnosed with dementia; I had been tasked with taking him to get his driving assessed, an appointment that ended with a revoked license. To read Chast’s comic take on similarly depressing and taxing situations — she riffs on everything from Meals on Wheels to Depends — gave me permission to admit to feeling overwhelmed and resentful. When I turned to a cartoon showing the Grim Reaper sitting in the living room of an old folks’ home, I laughed so hard I called my sister.

I’ve loved Chast’s cartoons since 1984, when I moved to New York City to go to college. I was from Minneapolis and knew nothing of the customs of Manhattan. So I subscribed to The New Yorker, figuring it would give me the cultural cues I needed by pointing me to a Godard film at the Thalia or the best Chinese- Cuban restaurant in Morningside Heights. But the truth was that the New York depicted in the features and reviews was so far removed from my daily reality that I always felt the stab of nose-pressed-up-against-the-glass envy. I was from a place that bragged about having the first enclosed shopping mall.

Which is why my favorite feature in any issue of The New Yorker was the occasional cartoon by Chast, whose deceptively casual freehand drawings often focused on interiors and the people who occupied them. There were lumpy couches, rotary phones, tables set with unappealing meals. Chast was a decade older than I was — she published her first cartoon in The New Yorker in 1978 — and the world that she depicted was quirky, awkward, neurotic and female. Her characters weren’t wealthy or sitting in board rooms. They couldn’t afford fancy restaurants or summer shares at the beach. One cartoon, called, “More Hamptons” was a riff on the weekend options for a young person with no money or real estate-endowed pals. There was Tubhampton, Roofhampton, and — my favorite — Fanhampton, which showed a skinny guy slumped in front of a fan, sipping an umbrella drink.

I recognized myself in Chast’s cartoons — and I still do.