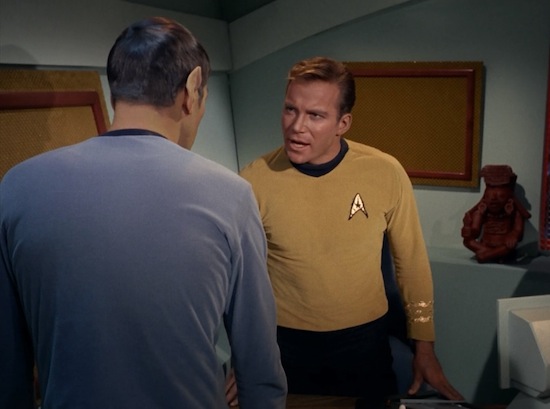 First in a series of posts, each one analyzing a single Captain Kirk scene from the Star Trek canon.

Alone in his quarters, in “The Conscience of the King,” Kirk sits — literally – in judgment on the itinerant Shakespearean actor Karidian, who may or may not be Kodos “the Executioner,” a colony governor responsible for the massacre of thousands, including members of Kirk’s family, on the planet Tarsus IV two decades earlier. As a victim of Kodos’ crime, Kirk wants revenge. But as a Starfleet captain, Kirk cannot act unless he is certain that Karidian is indeed Kodos — and there is no way to know that for sure.

When Spock and McCoy arrive, the scene’s blocking and design speak volumes. Normally, Spock and McCoy serve as Kirk’s moral sounding board, on the bridge — but strongly tempted to make this judgment alone, he has retreated to his cabin. There is a certain physical separation in the scene which mirrors Kirk’s emotional separation. Kirk wears command yellow, and his desk and wall art share that palette; McCoy and Spock wear subordinate blue, and the lighting around them is blue as well. Hell, there is even a red line (formed by a screen) between him and them. Kirk has backed himself into a corner — again, literally. His role as captain demands that he rise above personal pettiness; but without the raised dais of his bridge command chair, he looks small — he is human, all too human.

With McCoy holding position on Kirk’s left, Spock rounds Kirk’s desk and takes up his usual position at Kirk’s right hand. His friends have surrounded him, in a manner both confrontational and supportive, and the petty Kirk lashes out. He pulls rank on Spock (“Aren’t you getting a little out of line?”), cuts off McCoy. But he’s out of his chair, now — no longer petty, no longer sitting in lonely judgment. Once on equal footing with Spock and McCoy, his anger subsides. McCoy asks him, “Are you sure it’s not vengeance?” and Kirk’s voice is no longer peremptory as he answers: “No, I’m not sure. I wish I was.”

Here is the crux of the scene, and of the episode. A leader is supposed to be a “man of decision” (as Karidian — who, as Kodos, ordered thousands of colonists executed in a wrong-headed effort to avert the starvation of the entire colony, will claim), yet Kirk is indecisive. The suspiciousness of the timing between Kodos’ disappearance and Karidian’s appearance, not to mention the fact that everyone surviving witness to Kodos’ crime has died in mysterious circumstances when Karidian’s troupe was in the area, may be enough for Spock and everyone else. But it’s not enough for Kirk — not if it means condemning a man to death. This is where the differences between Kodos and Kirk ultimately lie: in Kirk’s willingness to acknowledge that he might be wrong, and in his belief that one must be absolutely certain before ending the life of another human being.

Kodos, a leader who lacked these qualities, was a monster. Kirk, however, is a man.

See All Posts by Dafna Pleban

Dafna is an editor working at the comic book and graphic novel publisher BOOM! Studios. Lumberjanes is one of her titles.