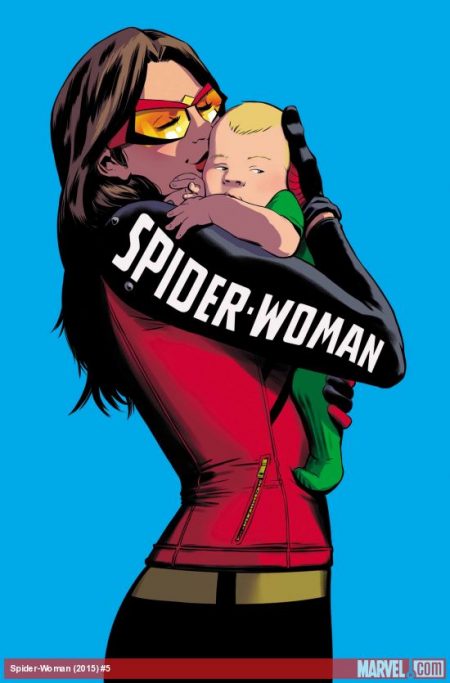 By early 2016, I was just over a year into this parenthood gig. I was realizing what most parents come to grips with at some point: parenthood is both extraordinarily rewarding and crushingly ego-deflating. During this time — as I grappled with the often overwhelming demands of raising twins — over in the pages of Marvel’s Spider-Woman, Jessica Drew was pregnant and still working as a superhero, while showing an ever-growing baby bump. What followed, over seventeen glorious issues, was something truly unique and fairly groundbreaking in mainstream superhero comics: an evolving story arc that not only added depth to a decades-old character, but proved superheroes can indeed undergo real, life-altering change, and be better off for it.

One of the unwritten rules of superhero comics is that the more things change, the more they really stay the same. During Dennis Hopeless’s time writing Spider-Woman, however, he and his excellent artistic collaborators Javier Rodriguez and Veronica Fish created a story arc that ran counter to the standard “illusion of change” usually offered by comics. Hopeless — himself a relatively new father of twins — actually allowed Jessica to grow and mature through various stages of parenthood. When we first learn she’s pregnant, it’s clear she is not going to let impending motherhood define her. She continues to work, right up to giving birth to a baby boy. Raising the child as a single parent, but with help from friends including Carol Danvers (Captain Marvel) and reporter Ben Urich, Jessica juggles diaper changes with her private investigation/superhero work. It’s difficult, and she struggles with feeling torn between the dueling responsibilities of her work and her child.

Navigating the complexities of being a working parent, Spider-Woman proved to be the most personally relevant superhero comic on the stands for me throughout the entirety of Hopeless’s all-too-brief run. Here was a comic about a superhuman struggling with the same sort of questions my friends and I were asking ourselves every day: how do we meet the demands of parenting and a career without losing sight of who we are, independent of these responsibilities? Watching Jessica deal with this, issue after issue, while struggling against great adversity — including Skrulls! — inspired me. After all, that’s just what we do as parents: we get stuff done. Somehow.

For my money, Dennis Hopeless’s Spider-Woman offered one of the most thoughtful explorations of the sort of adult concerns all too rarely examined in superhero comics. It passed through the comic book world far too quickly, but it will endure as an important and singular work in the superhero cannon.

See All Posts by Michael Campochiaro

Michael Campochiaro is a contributing writer at several websites, including Sequart, The After Movie Diner, and his own site, Words Seem Out of Place.