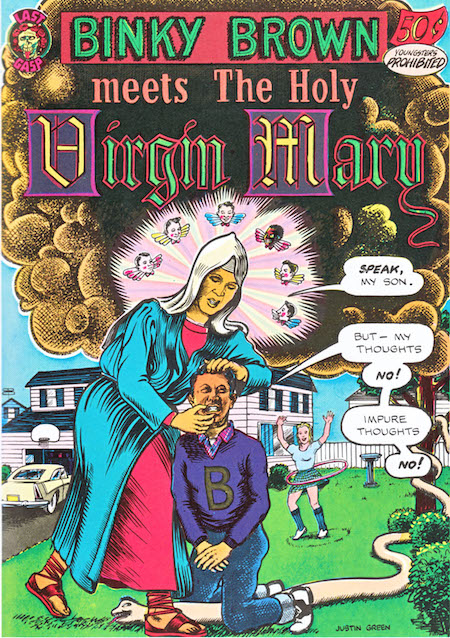 The 1972 underground classic Binky Brown Meets the Holy Virgin Mary may be the most influential comic book you’ve never heard of. It’s the first autobiographical comic book produced in America, a genre that now floods the upper shelves of your local bookseller’s “Graphic Novel” section, a whole corner of that cool comix store, and just about the entire backlist of Fantagraphics Books. Also: It belongs with the great works of religious skepticism, right up there with the writings of David Hume and Monty Python’s Life of Brian.

Also: It cratered my 15-year-old mind while ruining me for anything resembling conventional comics.

It turns out there’s a name for this compulsion — Scrupulosity. Who knew? Probably every Catholic kid, even if not all of them take it to the lengths of Binky Brown, whom Green shows constructing elaborate private rituals and nonsense code-words like “Noyatin” to ward off taboo thoughts. As someone raised in the somnolent fields of New England Congregationalism, where my religious training mostly consisted of gluing dried pasta to cardboard and spray-painting it gold, the psychosexual catechismic shit-show of Binky Brown Meets the Holy Virgin Mary was supposedly terra incognita. Yet the sense of a serious young lad swallowed alive by some sudden beast within, a development equally ludicrous and fearsome, was not unknown and not just by me. Federico Fellini was rumored to be a fan of the comic. Which made sense.

Without the, um, seminal Binky Brown, would Harvey Pekar have kept his brilliant banalities to himself instead of bringing them to life in the groundbreaking ’80s alt-comic American Splendor? Would Marjane Satrapi have committed Persepolis to page instead of panel? Would Alison Bechdel’s Fun Home have remained undrawn, unstaged, unknown?

Would Aline Kominsky have drawn Goldie, A Neurotic Woman within months of Binky Brown in 1972 and would her soon-to-be husband (and underground comix godhead) R. Crumb have started delving more deeply and personally into his own Id? Would Green’s friend and fellow ink-stained rebel Art Spiegelman have worked up the nerve in 1973 to draw Prisoner on the Hell Planet, the first stirrings of what would become Maus?

For those of us who wandered into Green’s mindscape of sin and remission primed by Crumb’s Zap Comix, Binky Brown Meets the Holy Virgin Mary was the final proof that American graphic narratives — OK, cartoons — were capable of mining layers of human experience far beyond the muscle-bound power fantasies of the mainstream.

Today, of course, the Marvel mainstream is everywhere. Yet Green’s creation is still out there, for sale on eBay or on a counter at a comics convention or in a box behind the register at that cool comix store. And Binky Brown still burrows away, termite-like, under the skin of a repressed pop culture. You say “Excelsior.” I say Noyatin!

See All Posts by Ty Burr

Ty Burr is a film critic for the Boston Globe and the author of Gods Like Us: On Movie Stardom and Modern Fame (Anchor).