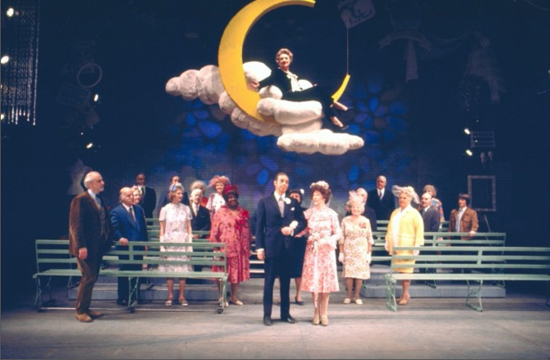 With music by John Kander and lyrics by Fred Ebb, the team behind the 1966 Broadway smash hit Cabaret, 70, Girls, 70 should have been a success. The show revolved around the residents of The Sussex Arms, a run-down senior citizens’ hotel. After being rudely turned away by a local hospital, feverish septuagenarian Ida Dodd lifts a thermometer from the drugstore. She realizes that no one pays attention to old people — and a theft ring is born. The gang uses the proceeds of their fur heists to revitalize The Sussex Arms. Because most of the cast members were former vaudevillians and show-biz veterans, they also burst into Tin Pan Alley-style musical numbers outside of the storyline. Sometimes they broke the fourth wall in an attempt to explain the stage action to the audience. “I just go into the wings and die, that’s my way out,” says Ida at the denouement. She then appears high above the stage, seated on a crescent moon.

What might have worked as camp merely baffled audiences. It didn’t help that long before 70, Girls, 70 opened on April 15, 1971, headlines like “Musical Deals with Geriatrics” and “Old Peoples’ Musical” set a tone that was hard to overcome. The reviews themselves were brutal. New York’s Daily News called the musical “about as enlivening an affair as a New Year’s Eve party thrown by the members of a St. Petersburg shuffleboard club,” which left the reviewer “squirming” in his seat. The songs were “brisk and mindless,” and the scenery “nondescript.” At least the costumes “came off somewhat better.”

Even positive reviews were damning by their faint praise. The show started slowly, noted the Brooklyn Heights Press, but was “whimsical, delightful, and sentimental” when it got going, even if it wasn’t “your monumental night in the theater.”

Perhaps the most prescient criticism arrived while the show was still in tryouts in Philadelphia. “Old age hasn’t quite caught up with 70, Girls, 70,” wrote James D. Sneddon of The Daily Intelligencer in a March 10, 1971 review, “but one keeps waiting for the collapse. It never comes, but the new show… threatens to die of cardiac arrest several times.”

Three days later, star David Burns collapsed and died onstage of a massive heart attack. Kander told a reporter in 2006 that cast members maneuvered Burns’ body into the wings. “Then, because they were all expert at improvisation, they managed to get through the show by divvying up his lines.” A certain amount of wishful thinking may have colored Kander’s memory, given he also asserted that audiences had been “rapturous” about the show.

Think for a moment about what 70, Girls, 70 might have been: The darkest of black comedies, about the cast of a failed musical, trying to deftly move their deceased compatriot offstage while singing bouncy songs about zany old people, a Kander-Ebb-Buñuel production.

70, Girls, 70 closed after 35 performances. “I loved that show like a father loves his weakest child,” remembered Ebb.