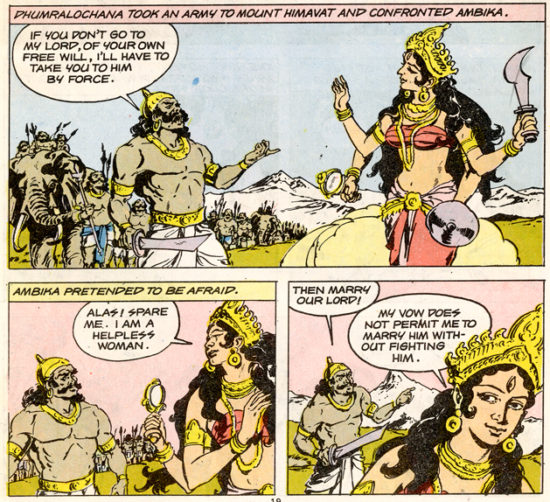 Every two years, my parents would take me to India for a two-month “homeleave.” We would go there in July and August, when temperatures shot up to the ’90s, the humidity was at near 100% all the time, and the government-sanctioned blackouts (“load shedding”) occurred every day. I loved seeing my cousins and aunts and uncles, but I would pine for the A/C and comfort of our Manhattan home.

One source of solace, though, were the Amar Chitra Katha comics that my folks would buy for me. These were sold everywhere — at the magazine stall, in the grocery and fish market, and at the Oxford book store on fashionable Park Street. These comics told the story of the Indian subcontinent from many angles: adaptations of religious texts like the Bhagavad-Gita and the Ramayana; stories of historical figures like Subhas Chandra Bose, the Indian freedom fighter; retellings of fables like the Panchatantra, a collection of parables with a cast of animal characters.

I’d spend hours poring over these comics, admiring the elegance of the linework, the attention to detail in the costumes and hairstyles, reveling in tales of derring-do and sheer adventure in what were often religious texts.

I gravitated to the stories of women: Mirabai, the musician and tireless devotee to Krishna; goddess Durga, whose image adorned many walls in our Bengali home; and my favorite, Laxmibai, the Rani of Jhansi, a warrior queen who put up a spirited resistance to British rule in the mid-1800s. These and many other stories were known to most Indian children but for me, living in the US and only occasionally having the chance to visit India, ACK comics were my personal tutor in the history and culture of my motherland.

Only later in life did I come to terms with the problematic nature of some of the representation within ACK comics: the heroes of all the stories (gods, warriors, historical figures) were depicted as light-skinned, while demons, villains and other unsavory characters were darker-hued; despite India’s large Muslim population and the important role Islam has played in India’s history, most of the stories in the ACK catalogue skewed towards Hindu representation; and some thorny historical details, like Subhas Chandra Bose’s alliance with Nazi Germany during World War II, are quickly glossed over.

Despite these prickly issues, I still have a place in my heart for ACK comics. Not only did they instill in me a sense of what it means to be Indian (however complicated that sense may be), but these comics spurred me on to become a comics artist myself. I hope in my own work that I am able to open up the world that ACK bequeathed to me, by actively deploying representations of complex South Asian characters — darker-skinned heroes, transgender protagonists, women of all body types — with a multiplicity of stories to tell.

See All Posts by Bishakh Som

Bishakh’s work has appeared in The New Yorker, The Strumpet, The Boston Review, Black Warrior Review, VICE, The Brooklyn Rail, Buzzfeed, The Huffington Post, The Graphic Canon vol. 3. She received the Xeric grant in 2003 for her comics collection Angel. Her comics will also appear in We're Still Here (The first all-trans comics anthology). You can see more of her work at Bishakh.com.