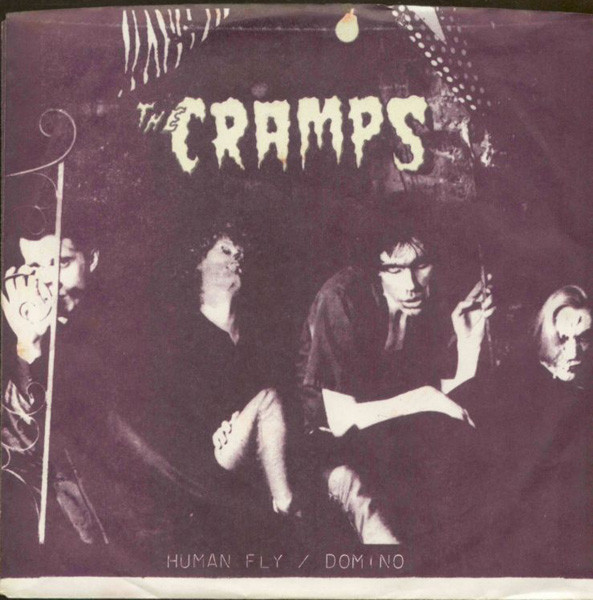 In 1986 I was ten years old and knew all the words to ‘Human Fly’ by The Cramps. On my nylon-stringed kid’s acoustic, I learned how to play the descending chromatic scale that slimes down the song’s intro. I would tape one ear from a pair of Walkman headphones to the body of the guitar and plug them into the mic socket on my little stereo. Pushed through its small speaker, I could emulate The Cramps’ overloaded sound well enough for me to play along. I went to all this effort not because I had a precocious interest in underground music, but because ‘Human Fly’ cracked me up. I loved the onomatopoeiac ‘bzzz bzzz bzzz’ lyric and how the buzz seemed part of the guitar fuzz. There was Lux Interior’s yelping, desperate voice, trapped in rockabilly-style slapback delay like an insect trying to escape through a glass window. The tremelo twang on Poison Ivy’s guitar sounded like knees knocking together in terror, shoved along by the bullying tom-tom strut of the drums. In my opinion the song was a top-notch comedy classic, a work of formal perfection like ‘Rock Lobster’ by The B-52s, which I had also learned backwards. I had no clue whether The Cramps or the B-52s were punk, post-punk, new wave, psychobilly or whatever subgenre subdivision that fans and critics had them pegged in, because I lived in complete ignorance that those genres existed. Music was not, at that age, about allegiences. ‘Human Fly’ was simply an excellent record, to be filed next to my other favourites at the time, which included BBC Comedy Sound Effects Vol. 4 and the theme from Chariots of Fire by Vangelis.

My older brother, Mark, had brought The Cramps into my life, along with The B-52s and many other bands I would later come to learn were punk, post-punk, glam, or what-have-you. Bands who made music I would continue to treasure into adulthood. Mark had a great talent for taking kids seriously and viewing the grown-up world as an infinity pool of amusement. I think he loved that The Cramps could work on so many layers. As an adult he got their B-movie punk cool and understood how to read their 1950s retro references, but could help me relate them to The Munsters and The Addams Family, re-runs of which I enjoyed watching on British TV. It wasn’t long after I memorized the lyrics to ‘Human Fly’ that Mark sneaked me into the local cinema to see John Waters’ Hairspray. Looking back, I now understand this phase to be my primer in camp and postwar Americana.

I’m now in my mid-forties. BBC Comedy Sound Effects Vol. 4 and the Chariots of Fire OST went to the wall decades ago but I must have listened to ‘Human Fly’ hundreds of times over the years. By now I’m able to place The Cramps on the rock family tree. I’ve read the punk histories, read the theory books about retro, spent too much money on some 180gsm vinyl reissue of their music. But still what I fundamentally love is the ‘bzzz bzzz bzzz’ of a record that makes me laugh.