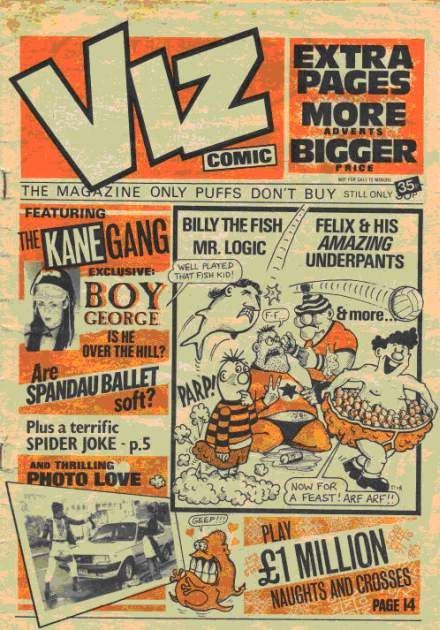 “Hello, Good Evening, and Bollocks.” Thus spake one of my favourite Viz characters, Roger Mellie, “the Man on the Telly.” Mellie is a polite-looking news reporter and TV presenter who can’t stop himself from fabulously, pointlessly swearing: “Today I’m reporting from Windsor, this fucking great big twatter of a castle.” Yes, very silly. And completely irresistible.

Viz (1979–present) is set in a world not unlike that of the Dandy and Beano comics: it’s all short trousers, fish n’ chips, and an atmosphere of British post-War austerity. While some characters are clear spoofs of Dandy creations (like Desperately Unfunny Dan) or are written in a karmic Beano-like format in which miscreants get their just desserts, writing it off as parody does not explain the glory of Viz. Still, watching these innocent-looking characters swear (Roger Mellie, Sweary Mary) and guff (Johnny Fartpants) and struggle with a surfeit of charisma (Buster Gonad and His Unfeasibly Large Testicles) is undeniably part of the pleasure.

But what I really like about Viz is that it’s so gleefully absurd. My first Viz memory is of a tabloid-style headline reading “I HAD SEX WITH MYSELF: MAN FONDLES HIS OWN BUTTOCKS.” This would have been good enough, but the words had also been placed in close proximity to a picture of the Prince of Wales in an unrelated story. This bonus irreverence still makes me laugh twenty years later and it was achieved with an area of real estate the size of a postage stamp. That’s Viz for you: a dense mosaic of relentless knockabout nonsense, page after page, panel after panel, every square inch a miracle. Consider “Viz Top Tips,” capsule lifehacks in between comic strips supposedly submitted by genius readers (“Make your car easier to find in a large car park by letting down all the tyres. On your return, simply look for the lowest car.”) and the “Letterbocks” page (“Fish — everyone’s favourite dish. Or so the television advertisers tell us. What rubbish. My favourite is Roast Lamb.”)

Another part of the joy is somehow being able to look back through the telescope at the writers and artists. There is little aesthetic distance and you feel closely connected to the comic’s creators. You can tell that they were giggling, high on mischief, as they work in their bedrooms (Viz literally started in a bedroom).

If it had come from London instead of working-class Newcastle, I’m not sure it would have been possible to enjoy characters like “The Fat Slags” and “Sid the Sexist” in that there would be no sense of being one of them and certainly no sense of punching up. You also wouldn’t get speech bubbles containing text like “Howay Biffa. We’re gannin’ for some fish n’ chips,” etc.

Incidentally, I saw a recent Beano in my doctor’s waiting room earlier this year and was shocked to see that it contained a strip about farting. British comicking culture has eaten itself. And, naturally, shat itself.