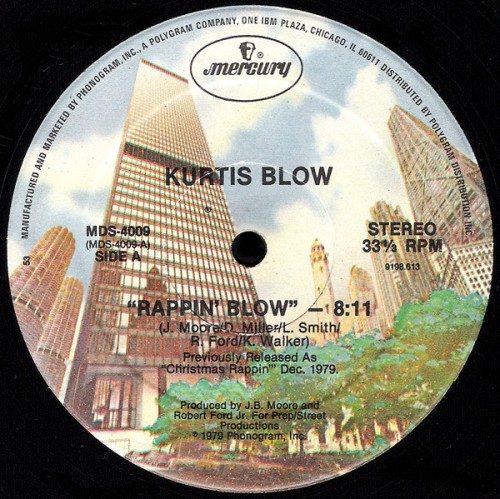 Third in a series of posts analyzing and celebrating old-school hip hop.

In 1979, Kurtis Blow became the first rapper to sign to a major label, releasing “Christmas Rappin’,” aka “Rappin’ Blow,” on Mercury Records. Being such an early release, nobody was 100% sure exactly what a hip-hop record should entail. Rappers were known for keeping parties energized while DJs mixed records. It was all about interacting with an audience. Yeah, they rhymed, but these MCs were still masters of ceremony in the most traditional sense. How do you put that experience onto a record?

Well, different artists tried different solutions. Some roped their band members into playing the audience’s role, so when they said, “skate,” two depressed guys would limply reply, “roll…” Others just left gaps of silence for the fans to fill in at home. Today, of course, rap music has become much more intimate; they’re speaking directly to you, the listener. But in 1979, what did Kurtis Blow do?

It seems like he rounded up whoever was in the offices at Mercury Records that day. There’s definitely more than just a couple of sparse studio musicians on hand, but not enough to be the audience at a real show. At least, not a very popular one. There’s a moment in the middle of the song where he breaks the audience into groups, calling out, “The people up front, if you want to bump” and “The people in the middle, if you want to wiggle.” And it’s clearly the same handful of voices responding every single time.

It’s surprisingly perfect. They’re a charming bunch, and after repeated listens, you feel like you’re getting to know them. You begin to recognize that the girl who enthusiastically screams “Do it again, baby!” at 3:50 is the same girl calling out “Come on, now!” at 5:36. In fact, there might only be one female voice on the whole track. She’s high-pitched, even shrill, but clearly very happy to be there; and the good time she’s having is infectious. When Kurtis commands everyone to scream and the rest of the gang goes berserk, she decides to give us a sexier, funkier “Oohweh, oohweh!” You feel like these people are along for the ride with you.

It’s almost a shame when their spontaneous exultations are lost in the mix under the loud music and Kurtis’s rapping. Of course it’s only right — he is the star of the show. But once you’ve memorized all of Blow’s famous rhymes, you want to pick out the rest. So many people caught onto a pair of closing ad-libs, in fact, they got included in the lyrics printed with the 1980 LP. At the end of the song, once Blow has finished rapping, a deep-voiced guy jokes, “It’s ten o’clock; go to bed!” Then, ever so faintly as the song fades out, we hear a second guy retort, “But I don’t want to!” And I’m with him; I want to stay and party with these folks. I’ve at least gotta get that girl’s phone number before we go home.

John "Werner von Wallenrod" McKelvey has been writing about hip-hop on the internet since there was an internet. He was a writer and editor for The Source magazine in the late 90s, and has since written for Hip-Hop Connection, Diggers With Gratitude, The Miami Herald, Rebirth Mag, Record Collector Magazine and many others. Check out his blog.