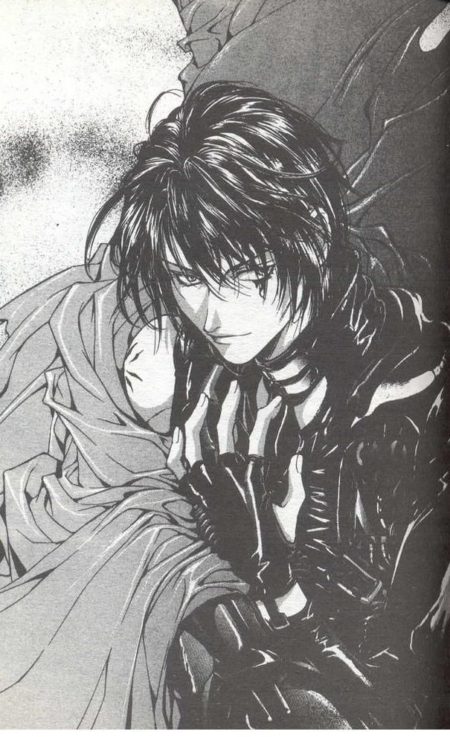 The first time I ever laid eyes on Kaori Yuki’s artwork, I was a desperate college goth kid in the middle of nowhere trying to navigate my way through a minefield of midwestern cheerleaders on the floor of my dorm. I had just discovered an array of colorful rockstars from Japan, glam rockers from the visual kei scene, and I had taken to wearing black lipstick and collars and smoking clove cigarettes, dying for the kind of poetry that my college experience didn’t provide. I stumbled across a website that seemed to match visual kei rockers with their comic book counterparts — characters that belonged, it seemed, to an epic called Angel Sanctuary (1994–2000).

I was transfixed by Yuki’s spider-fingered demons and angels with wings wrapped in gauze, her crucifixion imagery alongside leather-clad cherubs with tattoos and scars on their faces. I knew I had to get my hands on these books somehow, whether I could read Japanese or not.

This was 1999. There was not a huge international market for manga yet. I ordered the first two volumes off of eBay and dug deeply into the pre-Google dark internet for translations, which I printed out and then spent hours painstakingly matching each line of text to its corresponding dialogue bubble. I read the entire series this way. It had yet to be finished, so I bought each new volume in Japanese and read it with translations — twenty volumes in total.

It’s not just pretty art, see. It’s the bizarre and emotional story of the archangel Alexiel whose body is imprisoned for eternity after attempting to rebel against God. Her soul is sent to earth for an endless series of reincarnations, the current form of which is a delinquent high school boy named Setsuna who happens to be madly in love with his sister. Then she dies, and Setsuna crawls though hell and all the levels of the afterlife to find her. And that’s just the premise. The steps along the way, the cyborg tentacle golems and dictators and bodiless entities and literal masses of sentient eyeballs, are demented brilliance populated by characters whose personalities are equally mystical and downright disturbing. I found my home among them. I was struggling with my own gender identity at the time, and Yuki’s baggage-free treatment of her genderfluid cast, from transgender demon Arachne to the gender-free Adam Kadamon, was exactly what I needed to assuage my own guilt and confusion.

Angel Sanctuary is one of the greatest graphic epics ever created. It was also the comic I discovered exactly when I needed it — a saga to drown in, to capably soothe the fear that I had lost my sanity, because even if I had, these psychotic demons and angels proved I was in good company.

See All Posts by Holly Interlandi

Holly Interlandi is a comic book editor (BROKEN MOON, MONSTER WORLD) and writer (LAST SONG, LOST IN SPACE), as well as a horror writer and reviewer, having spent 9 years editing Famous Monsters magazine and its related publications. She lives in Los Angeles with her awesome dog.