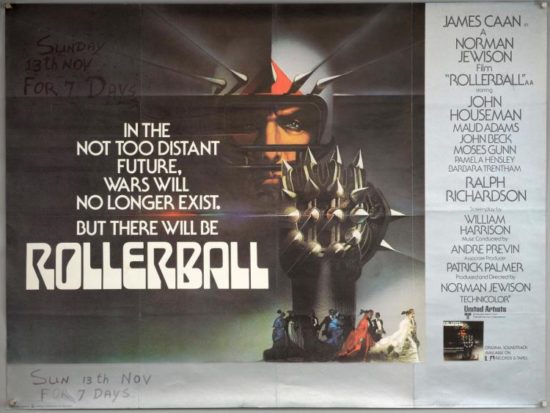 I imagine even malevolent corporate overlords who watch Rollerball see John Houseman’s malevolent corporate overlord character and think, “Wow, that guy is evil.” He is doughy and severe with his black suit and flagrant nostril hair, while James Caan’s rollerball champion is sleek and gorgeous in his form-fitting white jumpsuit, high muscular shoulders, and permanently sad blue eyes. In one scene between the two, Caan cuts his finger on the hanging shards of white glass that serve as Houseman’s office walls. Houseman and the “executive directorate” of the six corporations that run the world — Transport, Food, Communication, Housing, Luxury, Energy — push Caan to retire from the gladiatorial game. Caan refuses. The directorate in turn makes the game’s rules more murderous, to eliminate him that way.

The dystopian action film duality is stark. The directorate has replaced citizens’ freedom with comfort. As Agamemnon did to Achilles, they took away Caan’s wife and gave her to an executive. Sex has replaced love. There’s a pill for every mood. No books, only a computerized “brain” that has “lost” the 13th century. White women and black men — there are evidently no black women in Rollerball’s imaginary 2018 — have no subjectivity except as concerns James Caan’s concerns.

This last dystopian element of the film I assume is inadvertent. But the problem with all the above-named elements is that they fail to illuminate what is seductive about life in this future world; they fail to render sympathetic or comprehensible the experience of anyone who finds the status quo acceptable, which is seemingly everyone; they fail to show why nothing but the dazzling charisma of Caan’s rollerball champ could incite rebellion.

Luckily, in Rollerball’s Manichean vision of the future, there are aberrations, loose ends, opacities — inadvertent or otherwise — that save the movie from defeating its own intentions. One of them is a standard pitfall of movies that attempt to depict the horrors of violence: if John Houseman’s nose hair and the pills and the sex and the incinerating of fir trees with guns that shoot fire instead of bullets don’t make you want six corporations to take over the world, rollerball itself will, i.e., the rollerball scenes in Rollerball are awesome, i.e., the violence that is meant to horrify instead seduces.

Then, too, the good guys are not all that good. There’s the obligatory hero’s-best-friend-gets-violently-killed-in-slow-motion scene, but the best friend, Moonpie, is a murderous, racist, misogynist asshole, so it’s hard to get on board with the revenge Caan takes against his assailants.

More poignantly, there is Caan’s movie-long pursuit of an answer to the question Why do they want me to retire? You’d think Houseman’s “The game was created to demonstrate the futility of individual effort,” and Caan’s mentor’s “They are afraid of you” would answer the question sufficiently, but Caan doesn’t think so. His quest to answer a seemingly answered question creates an interesting excess of meaning in the story.

What I love about Rollerball — more than rollerball itself — is Caan’s quandary, which is also mine: you’ve either heard or thought of every good explanation for your predicament, they all make perfect sense, and yet you still don’t know.