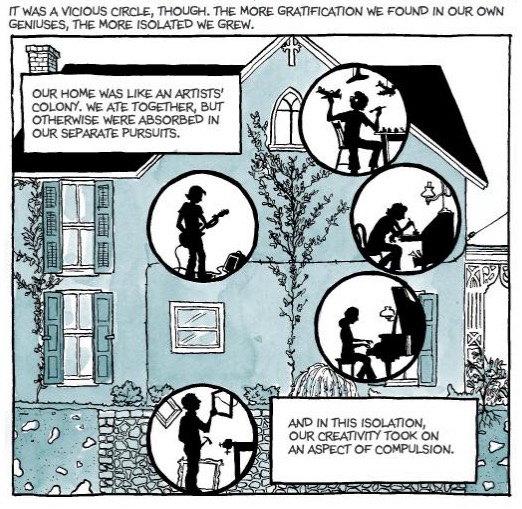 Fun Home was my life. With a few small substitutions, Alison Bechdel‘s childhood was remarkably similar to my own.

There the similarity ended. No big reveal for me in terms of my sexuality, though I did get married to a near-stranger at 26. My father moved out instead of dying, thought he did predecease my mother by six years. I think about that ten-year period — the only time I lived in a house with a nuclear family — through a hazy lens. That was me?

I remember feeling isolated, the only weird family in the rural area by the suburbs. The only Volvo drivers. We weren’t farmers, but we had a tractor, and my mom made my clothes. What were we? What was I? The concentric isolation was something I couldn’t make sense of at the time, or even see.

By the time Fun Home came out in 2006 I was nearly 40, post-married, and living pretty happily alone. My sister and I would occasionally get together and scratch our heads at our “raised by wolves” upbringing as if it had been a bad movie or something that happened to other people we distantly knew.

I read Fun Home; it hit me like a lightning bolt and my whole childhood snapped back around me.

My usual graphic novel experience was that stories about growing up were either “weird kid, normal parents” or “weird parents, normal kid.” Bechdel managed to make something that was both… or neither? It wasn’t the alienation parade of Tomine or Clowes or Ware, but it also wasn’t a story of summer friendship, or a family that works it out, like Tamaki or Telgemeier.

Fun Home is a story about the kid, the weird kid, with the weird parents, a kid who turns out okay. Until it came out, I hadn’t had a way of talking about my own childhood in a way that made sense to me. With Bechdel’s detailed descriptions and matter-of-fact illustrations, I could point to something that felt honest, both in literal terms but also in atmospheric ones. It helped me see my own deeply personal story as one that could just be… anyone’s story. That was me, and it was a lot of people. And that kid turns out okay.