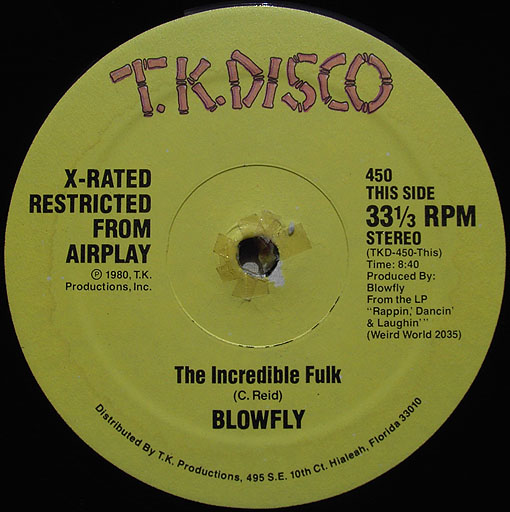 Fourth in a series of posts analyzing and celebrating old-school hip hop.

Blowfly (a.k.a. Clarence Reid) is an artist of many distinctions: prolific songwriter since the mid-1960s, key architect of Miami funk and Southern soul, and the first rapper to record sexually explicit lyrics. He’s also one of rap music’s great storytellers, as showcased in his seminal (in every sense of the word) 1980 classic “Rapp Dirty,” which chronicles the adventures of a badass African American truck driver traveling the deep South. Less celebrated is Blowfly’s brilliant follow-up from later that year: a funk-rap monster jam called “The Incredible Fulk.”

A rags-to-riches tale, “The Incredible Fulk” opens with Blowfly perusing the want ads for work. Desperate for money, our hero-to-be volunteers as a test subject for a mad scientist working on a male enhancement product. The procedure is a rousing success: Blowfly’s pitiful two-inch member grows into a surprisingly functional 4’10” monster cock, which he immediately tries out on the scientist’s wife with impressive results. The only catch is that Blowfly’s superdick is voice activated — it stays tiny until someone calls him a bastard.

When Blowfly enters a Biggest Dick contest, he faces stiff competition that includes Godzilla, various African mammals, and a dinosaur. He gets worried — what if no one calls him a bastard? But he’s in luck, because the contest is officiated by a redneck who not only calls Blowfly a bastard, but also throws in the n-word. This combination of the superdick trigger-word with the ugliest term in the English language causes Blowfly’s dick to grow so long and erect that it interferes with the Moon’s orbit. Blowfly wins the million-dollar contest prize, which infuriates the dinosaur; he celebrates by buttfucking Godzilla.

Other early hip-hop songs contained narrative passages, such as Sugar Hill Gang’s “Rapper’s Delight,” Kurtis Blow’s “Christmas Rappin’,” Jimmy Spicer’s “Adventures Of Super Rhyme,” and Blondie’s “Rapture.” But compared to Blowfly’s imaginative epics, these others seem bland and underdeveloped — did anyone really care whether Wonder Mike would remain friends with the guy whose mother served him chicken that tasted like wood?

Further exemplifying how much harder Blowfly was than “disco rappers” of the time, “The Incredible Fulk” concludes with a deadly 12-bar bonus verse calling out Kurtis Blow by name and declaring: “He think he’s good, he think he’s it, but I’m here to tell you that he ain’t shit.” I don’t know if it’s the first time one rapper overtly dissed another on wax, but it’s the earliest example I can think of. To Blowfly’s long list of underappreciated musical credentials, we should also add “pioneer of battle rap.”

See All Posts by DJ Frane

DJ Frane has toured with Blowfly on three continents. He also produced a series of instrumental hip-hop albums called “Beats to Blaze to” and has written about music for publications such as Wax Poetics.