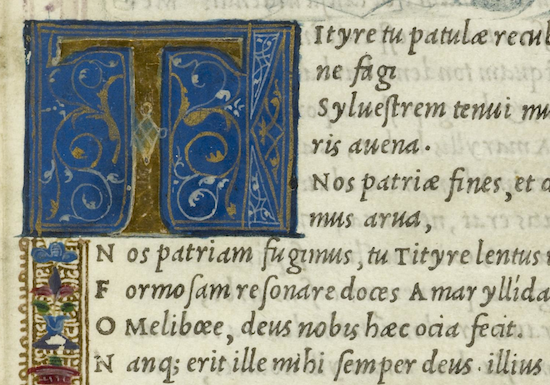 Aldus Manutius was a printer in sixteenth-century Venice, and he was looking to shake things up. The roman typefaces, based on manuscript letterforms the humanists thought dated back to Roman times (but which were in fact medieval in origin) had offered Italian counterpoint to the black-letter typefaces of the first German printers, but already they were old hat. When Aldus put the first version of a typeface we call italic to use in 1501, the printing press had been proliferating in Europe for half a century. In other words, it was about as old as the computer is now. It was a time of immense invention and swiftly spun variety in the printed book, and a time of new mobility and independence of thought and activity among certain classes of people as well — and the combination of new ways and new tools meant new kinds of books. Crucially, the book was getting smaller, small enough to act not only as a desktop, but as a mobile device.

This change in form factor catalyzed not only new uses of books, but new relations with them as well — and Aldus was smart about exploiting the combination of new, humanist learning with the physical intimacy of smaller books. To effect this intimacy, Aldus and his punchcutter, Franceso da Bologna, turned to the cursive forms of handwriting used by chancery scribes — flowing forms, with many connecting letters and swooping ascenders and descenders. Legend has it that the cursive Aldus chose to emulate was the handwriting of no less than Petrarch, but this is likely little more than canny marketing. The idea was to make a book that looked like it had been written out by hand — not a medieval manuscript book, of the kind that was still being produced in scriptoria, but something more like an author’s draft copy, or a piece of private correspondence. With its many ligatures and variations to suggest handwriting, Aldus’s italic had more than fifty separated letterforms for its lower-case characters. For printing purposes, it was unwieldy and impractical, but its look was widely admired — and swiftly copied. Although Venice gave Aldus exclusive license to use the cursive typeface (which they called not “italic,” but “Aldino”), new versions spread — and as they did, the typeface was streamlined and simplified. Its oblique flow captured not only the letter of Renaissance humanism, but its spirit as well.

What Aldus intended as a book face became a kind of typographic flavoring. In modern typography (by which I mean design and printing since the 17th century), italic typefaces are used emphatically. In journalism and academic text, it signifies titles of published works; in scientific reports, it specifies symbols that represent material quantities or variables. In everyday discourse, it gives type the lift and inflection of living speech. Although it hasn’t succeeded as the bookface Aldus intended it to be, it has flourished as a semantic marker, as code for intensification, energy, and attention. Today, when we mark web-native plain text with the <em> code, the tag instantiates in letterforms hearkening back to handwriting, to the spice and sprezzatura of the Renaissance. Emphasis, indeed.