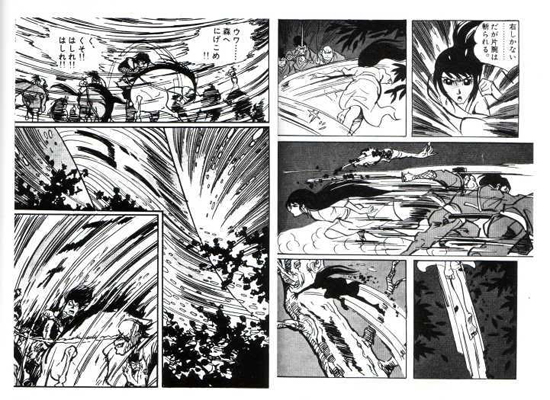 Every once in a while, several fringe interests intersect.

The second comic I ever drew was Gratuitous Ninja. I wanted to experiment with the storytelling form I’d seen in comics like Arzach; I didn’t want to waste time on plot or exposition. A child of the eighties, I’d been touched by Japanese soft power, and the ninja figured heavily in my childhood imagination. So I took this silent, frenetic figure as my foil. As the years passed there seemed to be something inherently radical about this icon and my comics reflected this. Shortly after, I discovered a manga-ka who’d done it way before me in a comic called Kamui Den.

Shirato Sanpei’s Kamui Den frames nihilistic class critique in a hyperviolent ninja epic. I’ve been marginally obsessed with Shirato for eight or so years now, and yet still know very little about him and have actually read very little of his work. I’d seen it many times before recognizing it. Viz’s English translation of Kamui Gaiden had been some of the first manga I’d ever seen on a comic book shelf. Once I randomly attended an exhibition of Garo (a comics magazine he founded) at the Center for Book Arts in Manhattan; at the time I had no idea who he was, but was struck by his images. Finally, about eight years ago, Thomas Ragon, a friend of mine and editor at Dargaud, showed me a copy of Kamui Den and it all fell into place. In the coming years I’d piece together a sparse history of Shirato Sanpei, the son of working-class radicals, who would launch the geki ga genre and cultivate a nascent manga avant-garde with Garo. For some reason, very little of Shirato’s work has been translated into English.

Why can’t we have nice things? I have my ideas.

In the early aughts, on a visit to Tokyo, while my girlfriend at the time got her hair coifed into a Chaka Khan halo, I wandered around Shimokitazawa for hours, browsing through used bookstores and thrift shops. I think this is where I found the book 100 Poster Masterpieces from Underground Theater. I was hip to Tadanori Yokō, but this book really stoked my curiosity and contextualized his work alongside that of his peers. Researching Tadanori, I discovered he’d starred in a film about a couple kids’ political and sexual awakening called Diary of a Shinjuku Thief. Its director, Oshima Nagisa, was famous (or infamous) for the politically radical and sexually explicit In the Realm of the Senses and I was marginally familiar with him because of the Western production Merry Christmas, Mr. Lawrence. Oshima also experimented (once!) with editing manga into cinema with Ninja Bugei chō, an adaptation of Shirato Sanpei’s Kamui Den. 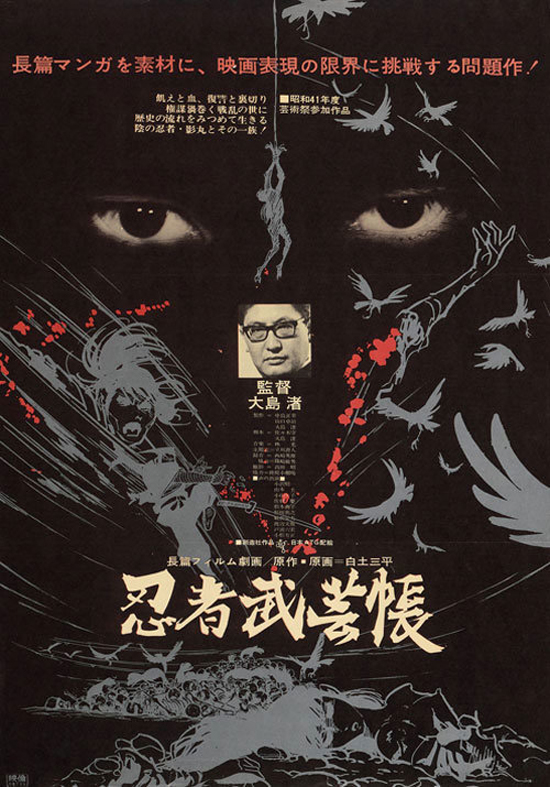 Now you won’t find a decent English translation of Ninja Bugei chō anywhere, though you can watch it in its entirety on the internet. The US seems to have slept on Oshima and Shirato. Shirato Sanpei’s voice, in particular, has only made it here in bits and pieces. Even so little was enough to spark my imagination; I continue to make work in dialogue with what I think he might have said.

I guess I should’ve taken my Japanese studies more seriously.

See All Posts by Ron Wimberly

Ronald Wimberly is a Brooklyn based artist working in print, comics, and film/animation. Notable works include Prince of Cats, GratNin, and LAAB magazine.