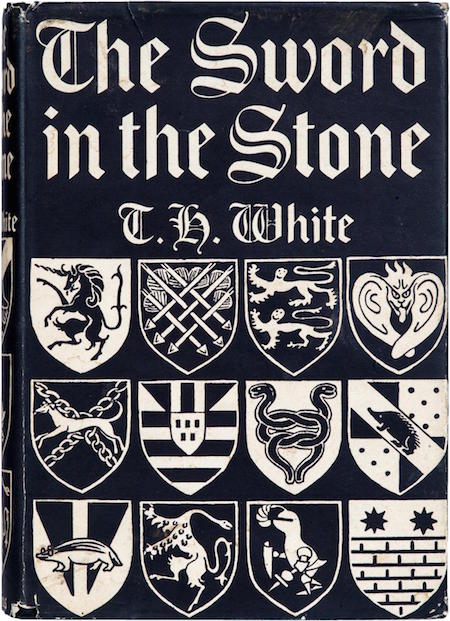 “He did not like the grown-ups who talked down to him like a baby, but the ones who just went on talking in their usual way, leaving him to leap along in their wake, jumping at meanings, guessing, clutching at known words, and chuckling at complicated jokes as they suddenly dawned. He had the glee of the porpoise then, pouring and leaping through strange seas.”

This passage, on page 51 of the first U.S. edition of T.H. White’s The Sword in the Stone, is ostensibly about the kind of grownup the Wart (short for Arthur) prefers, but it works equally well to convey the book’s appeal.

The seas through which the Wart and the reader pour and leap are sometimes strange indeed for modern readers. The book, a version of the boyhood & education of King Arthur (who has no idea he’ll eventually pull the titular sword out of the stone and become king), is set in what White calls “the old Merry England.” Numerous details, from the architecture of the Castle of the Forest Sauvage to the comic possibilities of jousting and ill-fitting armor, will resonate with those raised on Monty Python and Renaissance Faires. Readers also learn numerous terms of art from fox-hunting, English public school customs of the early 20th century, medieval logic texts, Christian parables, archery, falconry, and natural history. On the very first page, we’re informed that “the governess was always getting muddled with her astrolabe” — a phrase which, when my father first read it to me, sent me immediately to the dictionary to learn what an astrolabe was and how one might get it muddled. That small quest was the first of many the book sent me on.

Years later, I learned another term of art: ‘infodump’, a long passage of explanation or background information — most often used in a derogatory fashion. But in The Sword in the Stone, the long informative passages throughout the narrative aren’t dumped so much as piled like dragon-hoards; each one rich and gleaming. White assumes his readers will be as fascinated as he is by the difference in markings between a viper and an adder, how rooks fly, how perch swim, how a knight’s vigil is conducted — and we are.

See All Posts by Sara Ryan

Sara Ryan is a novelist, comics writer, and librarian based in Portland.