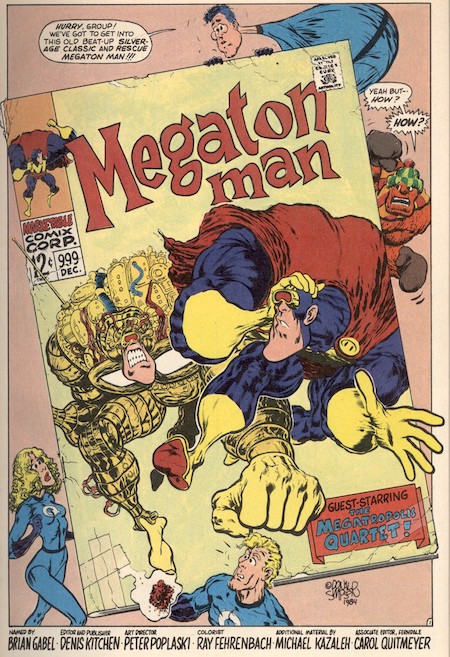 Sole survivor of a dying world fired towards Earth, the infant was exposed to cataclysmic rays, raised by a lost tribe of intelligent kangaroos, bitten by a radioactive frog, caught in the grips of a space-time-continuum blast, snuck a vial of top-secret premium soldier syrup while no one was looking and became MEGATON MAN. Disguised as dull reporter Trent Phloog, he would fight crime while trying to keep his secret identity safe (by wearing reporter clothes over his costume) despite his co-worker Pam Jointly’s tendency to fall out of windows.

Before The Tick (who he preceded by two years) there was another idiotic, over-muscled, superhero wandering the indies. Megaton Man’s first issue (the opening page of which features him fighting a mechanical version of himself — on the cover of issue 999 of Megaton Man) gently roasts the Fantastic Four (The Megatropolis Quartet) the X-Men, Superman, Orson Welles (as President of the United States, for some reason), Doonesbury (there’s an entire 16 panel Doomesbury comic on page 16 that gives a run-down, in real time, of the political ramifications of Megaton Man’s fight with Dr. Software), and neofuturist architecture (Megaton Man vaporizes a skyscraper during his battle, but a bystander assures everyone it was empty: “It was a John Portman”). These gags are interspersed with Jack Kirby-style splash pages, narrative-shattering backstory, 4th-wall breaking, and anything else, apparently, that Simpson could think of.

I’m sure I was overwhelmed as a kid, but all I remember is being completely charmed. All of this self-aware, self-referential stuff seems a little bit tired now, and maybe if I hadn’t read MM at such an impressionable age I wouldn’t have spent SO MUCH TIME ingesting postmodern literary criticism… but at the time, it was completely novel and sphincter-tightening.

Some of this I would have been exposed to from MAD Magazine and the like, but Megaton Man is so much more exuberant and benign; it’s the wink of a lover of dumb superhero comics, mostly devoid of mockery. It’s smart, biting, but gentle — maybe what made it appealing to a thirteen-year-old. Every comic-loving kid needs a burst of kind-hearted satire, absurdity, self-referentiality, manic fun-making that tears down the things that you love so you can see that they aren’t nearly so fragile as they seem. Because what doesn’t seem fragile to a thirteen-year-old — on the precipice of feeling teenager indestructible, we live that interim time feeling constantly, highly destructible.

Plus, Megaton Man was a fool immune to his own foolishness — and what teen doesn’t dream of that? Like The Tick (at least as I remember him), he was never in on the joke, yet never humiliated by it. Mostly because he was too dim, but that’s OK too. Any refuge from the storm.