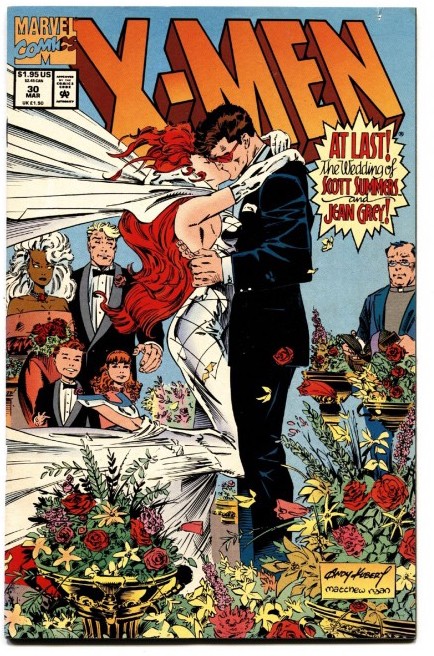 My own wedding was not something I fantasized about as a child. I never imagined my own dress, or what my colors would be. I didn’t dream about being a bride. I suppose this was the nascent point of a nontraditional view on a lot of ways to live life as a woman in the United States, one that has played out through most of my adulthood.

Another part of my counter-feminine childhood behavior was that I read comic books — the ones traditionally meant for boys. The long box is still in the basement of my parents’ house. It is filled with issues of X-Men, Gen 13, Lady Death, and other indies that really didn’t do anything to forward much of my budding feminist agenda visually — but in some way, the bold, intense female characters (whose bodies were unrealistic not just because of their mutant powers) felt empowering.

What I find amusing and puzzling, looking back on my collection, is the volume that I still think about and still love dearly: X-Men #30 (March 1994), “The Ties That Bind” — the wedding of Scott Summers and Jean Grey. I was ten years old when I first read it, and despite my naiveté and youth I knew that it was outside of the usual comic book action, violence and strife. It was joy and momentary peace, something so rare for the characters in its stories.

Paging through it, tracing what, at ten, I loved and still love now – the story is humanizing. Despite the use of flight powers to catch a bouquet and telekinesis to help a paraplegic man dance, it is “normal.” It showed a fairly common activity — two people getting married — and somehow made me as a child and me as an adult feel compelled by it. Beyond the routine of the event, its specific details — a dress designed by Nicole Miller, a first dance to U2’s “One” — tied it to the world I knew and lived in.

And then, of course, there’s the story & art as narrative. I will always hold in my mind the wraparound cover of the altar, flowers and its colors — the bright orange logo, the blue background, the contrast of white dress and black suit. Inside, the panels were so dramatic and vibrant, countering the normalcy and conventionality of an American wedding day, weaving together lighthearted bow tie jokes and the heaviness of emotion of so many of its characters.

X-Men 30 has stuck with me for over two decades, I even replaced it once as an adult when I thought I’d lost my original copy. Its storyline never pushed any daydreams of matrimony into my young brain, but I never forgot its lessons about gratitude and love. I still want to read about people who are different or ostracized and yet still feel joy, and are still inexplicably, fearlessly themselves. I still want to be that person myself.