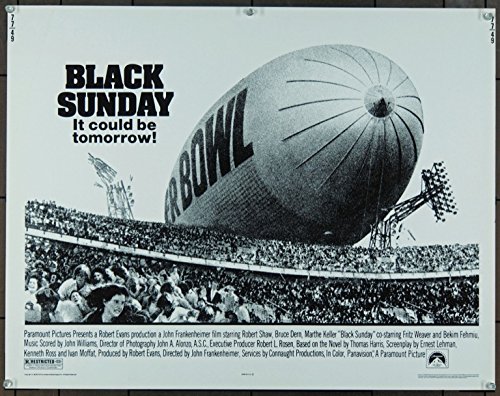 I knew Black Sunday as an ephemeral brand of heroin on the Lower East Side long before I saw the movie. It’s just the kind of name you want to give your heroin — generically apocalyptic. Look at the Wikipedia disambiguation page for the term: dust storms, bushfires, tornadoes, terror incidents, catastrophic wartime attacks, the opening of Disneyland. I didn’t see John Frankenheimer’s 1977 thriller by that name until last night, probably because I thought I already knew the drill. Anyway the poster seemed to say it all: Goodyear blimp, presumably hijacked by terrorists, crashes into stadium during Superbowl.

The era was big on ordinary things turning deadly; that year I’d already seen The Car (“a small desert town is terrorized by a powerful, seemingly possessed car”). Here the blimp is unnerving not only because it is a jolly, ubiquitous advertising device for a maker of automobile tires, but because it is slow and perceived as soft. There is something faintly animal about it, as if it were a baleen whale at Sea World that suddenly turned on the audience in the bleachers. That it can only smother humans, not devour them, is hardly reassuring. Anyway, it is an advertising device: the public is being murdered by the sponsor, and the television network that keeps a camera crew in its gondola.

Because this is a product of an older Hollywood, the principal mayhem is confined to the last half hour. It is preceded by a great deal of Story, which has the additional advantage of being Ripped from Today’s Headlines. The culprits are affiliated with Black September, famous for the 1972 massacre at the Munich Olympics — I should say “culprit,” singular, because it is pretty much down to Marthe Keller after all her colleagues have been wiped out by Mossad. She is cool-headed, precise, hyper-alert, and apparently on loan from the 1960s world of intellectual spy thrillers, as is her opposite number, the slightly preposterous Robert Shaw (a successful playwright and novelist in addition to being a film actor); he is the world’s Most Interesting Man recast as a Mossad agent.

Acting in a completely different movie, meanwhile, is Bruce Dern as the deranged blimp pilot. He takes his patented jittery obsessiveness so far over the top it ends up as the most persuasively realistic aspect of the picture. You may laugh as cheerleaders and tailgaters run screaming from the looming dirigible; you may smirk as he-men nonchalantly winch themselves in and out of moving helicopters on long ropes; you may groan as historical actuality walks across the screen (Tom Landry, some clown wearing a Jimmy Carter mask, the cast of Up With People). But you will not so much as snicker when Dern’s character, whose mania has nothing to do with ideology or even his back story, rhapsodizes over his minutely engineered plan to kill 250,000 people in a single burst. That part stays news.