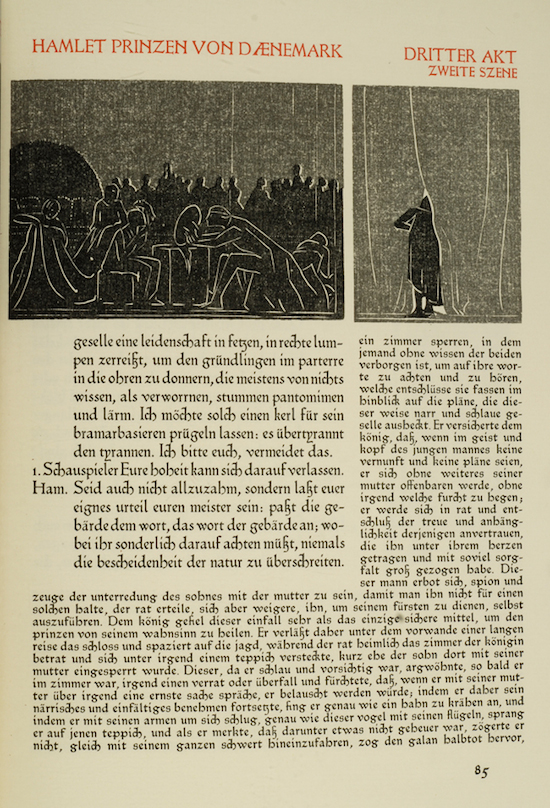 If you wanted to model a book after the earliest printed books, you might mirror their layout — placing the main text in the middle of the opening, with commentary surrounding it along the margins and illustrations interspersed. You might commission one of the great artists of your age to cut new woodcuts and choose a text that is itself centuries old but still loved today. And you might find a typeface to do the same, straddling the past and the present.

When Henry Graf Kessler wanted to print an edition of Hamlet, he did all of these things. The most striking part of the 1929 book is its illustrations — Edward Gordan Craig’s images are stunning and powerful. But what ties the Cranach Press Hamlet most clearly to Kessler’s vision of reworking the past is Edward Johnston’s type.

Johnston’s typefaces for the London Underground are decidedly modern sans-serifs. But for Hamlet, at Kessler’s direction, he turned back to some of the earliest fonts, the blackletter types designed by Peter Schoeffer. (The colophon for Hamlet states that the typeface derives from the 1457 Mainz Psalter, but L.M. Newman’s collection of Kessler’s and Craig’s correspondence describes the 1462 Bible and 1472 Decretum as being additional key texts for Johnston’s inspiration.) Schoeffer’s typefaces, like other early fonts, have their origins in scribal writing. Imagine writing with a thick quill, and you might — if you were very talented — come up with the blocky blackletter of medieval religious books. As Schoeffer continued to adapt those letters for the system of punches and matrices that produce metal letters, however, he opened up the white spaces, giving a whole different look to the page. This might have been an aesthetic choice, but it was certainly also a practical one: by introducing more space between the letters, Schoeffer reduced the number of ligatures and the pieces of type that needed to be cast.

Just as Schoeffer took the letters of earlier scribes and adjusted them, so Johnston took Schoeffer’s typeface and reworked it for a twentieth-century audience. In Johnston’s hands, the fussiness of the earlier letters is minimized, but if you compare the type of Schoeffer’s 1472 Decretum with Johnston’s 1929 Hamlet, you’ll see the resemblance clearly. Johnston’s ascenders tend to stand straight up, but the curves in the “h” and “g” come straight out of Schoeffer’s. The 12-point type used for the Hamlet commentary is a mixture of sans serif and serif, letting in more air while still suggesting the heaviness of blackletter.

See All Posts by Sarah Werner

Sarah Werner is a book historian and performance scholar who is Digital Media Strategist at the Folger Shakespeare Library. When she remembers to, she writes about the early modern printing process, digital technologies, and modern performances of Renaissance drama on her blog, Wynken de Worde. You can also find her online as @wynkenhimself.