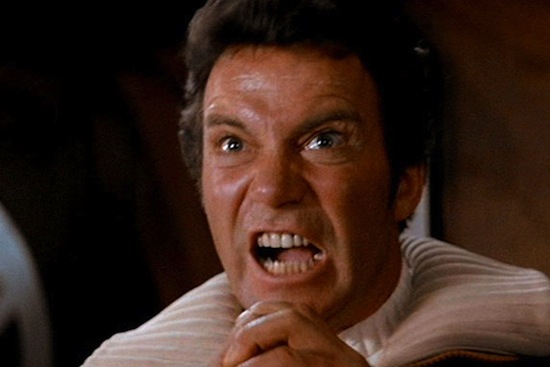 Third in a series of posts, each one analyzing a single Captain Kirk scene from the Star Trek canon.

Captain Kirk is — as Spock observes, “a man of deep feelings,” an inspirational leader and breaker of rules if he feels the end justifies the means.

Kirk often wins fights by getting his shirt torn so that he can exude the charisma that overwhelms his opponents. But not in Star Trek II: The Wrath of Khan. Here, Kirk is aging gracelessly, experiencing a mid-life crisis now that his career has been reduced to babysitting some cadets on a training mission. The return of the genetically engineered superman Khan (from the TV episode “Space Seed”) assures us of a climactic showdown — which, in a sense, we never get because the two never meet in person. It’s not a flaw in the film’s structure, though; the payoff is more satisfying than if they’d clashed in hand-to-hand combat.

This is the crux of the story: how Kirk the lesser overcomes Khan the greater. Kirk sets Khan up, gambling that he can goad Khan into a confrontation, and he’s right – he succeeds in doing so, even after Khan has stolen the Genesis device, the MacGuffin that propels the movie. Kirk mocks Khan’s “superior intellect,” constantly baiting him: “Like a poor marksman, you keep missing the target!” That is, until Khan apparently traps Kirk in a cave deep inside a planetoid with no hope of escape.

“I’ve done far worse than kill you — I’ve hurt you,” breathes Khan, his face softening in an almost orgasmic release of tension. As he leaves Kirk, apparently buried alive, our hero responds with an expression of frustrated apoplexy that has become legendary — a moment so great it has transcended the boundaries of the fiction. “KHAAAAAN!” bellows Kirk into his communicator, his face puffing and reddening in glorious cinematic rage. His face inflates like a set of bellows and you’re afraid he’s going to stay that way. It is ludicrous and terrifying at once.

Then the camera cuts from Kirk to a shot that slowly ascends from the bleak, cratered surface of the planetoid beneath the surface of which he’s trapped and we hear that rage again, out here in the vacuum of space, emotion breaking through the diegetic boundaries of the reality of the movie itself. As James Horner’s score swells beneath it, Kirk’s anguished howl is so intense it can be heard even here, between worlds, beyond atmospheres. It’s a brilliant directorial flourish from director Nick Meyer, a moment of emotionally heated storytelling so assured it sells the idea that even if Khan may actually have triumphed over him, Kirk is still a force of nature and not to be underestimated.

It’s all part of a ruse, of course — Kirk changes the rules and cheats death one more time and overcomes his adversary in the kind of epic space battle we expect from him. But the moment of extreme, inflated rage persists and swells beyond the movie like some existential warp-propelled speech balloon. It is an instant in a character’s history that has passed into pop culture as a motif in its own right.

See All Posts by Nick Abadzis