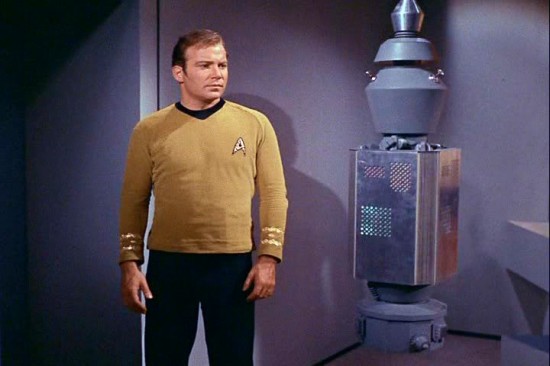 Fifth in a series of posts, each one analyzing a single Captain Kirk scene from the Star Trek canon.

Many of us have attempted to befuddle or incriminate a 21st-century computer’s AI algorithms. Perhaps you, like me, have convinced your Apple Siri that it is, say, a zealously ambitious Sub-Lieutenant in the Gestapo. (It is perhaps less likely, though, that you too plan to instruct Siri to Google “The Nuremberg Trials” immediately prior to upgrading your phone.) Amidst all this fun and frolic it’s important for us to remember the greatest Computer Admonisher of them all: Captain Kirk, he who pioneered the art of Totally Befuddling Sentient Mechanisms.

Whereas you or I might take casual pleasure in aligning our hand-held computing devices with the worst atrocities of the 20th Century, Kirk confused and demoralised overweening Byte-Quadrophenic Entities with bravery, wit, and a Demi-Reasoned Desilusion as joyful as it is wilfully arbitrary and paradoxical. Kirk is a man for all parsecs, and I reach the episode “The Changeling” as my favourite study. Jim, if I may be so bold, plays many roles here, enabling him to become the Meta-Human Mutate Thinkbox Slap-Admin seen in the episode’s denouement. Primarily, he is the trusting host, beaming aboard the Enterprise a highly sensitive “Space” Probe designated NOMAD who had just bombarded the ship with a Space Ray equivalent to 90 photon torpedoes. NOMAD’s subsequent behaviour does not entirely warrant Kirk’s initial graciousness.

Once an innocent Earth probe, NOMAD has not been quite the same since its encounter with The Other — a malfunctioning agricultural drone, not some Lacanian cosmic obscenity. This traumatic intermingling of algorithms sent NOMAD on a mission to destroy all biological life-forms, owing to their perceived imperfection. It also left NOMAD with intimacy issues. He — temporarily — kills Scotty because, in NOMAD’s words, he “tried to touch my screens.” Most importantly, NOMAD’s presence stokes up Kirk’s ever-ready Polyphonic Self. Our beloved Captain, owing to a Drydenesque comedy of identity, instantly adapts to the role of The Creator when Nomad identifies him as his actual inventor, one Jackson Roykirk — a name which, by the way, segues HILOBROW’s two “Enthusiasm” series: Jack “King” (roi) Kirby and James Kirk.

As a matter of life-preserving necessity, over the course of the episode Kirk adopts the role of protector, warrior, diplomat, actor, lawyer, gentile, God, Jewish mother, and rabbi. (“My son… the Doctor” is the Captain’s not entirely goyish elegy for the space probe that resurrected Scotty like The Very Lazarus himself.)

Thus “The Changeling” warrants detailed study as a prime example of Kirk’s effortless polymorphosity — a process crowned by his talking the probe into a self-destructive spiral of neurosis with a judicial tornado of accusations with regard to his failure as a perfect eradicating sentient entity. Kirk does this so well that your correspondent began to question his own self-worth, in an increasingly high-pitched and hysterical manner, before recalling that he is not a perfect eradicating sentient entity. Phew!

One day we all may have to give our electronic helpers a smack-down — whether it’s our phone, computer, TV, or toaster — or else face sudden and unpleasant death. Kirk reminds us that even the most ardent critic of Liberal Humanism must agree that the spirit of humankind cannot be reduced to a set of binaries, to a simple code of on and off switches. Kirk, the Analogue PolyMan who stretches his essence out towards eternity, knows that the human revolution will not be digitised.