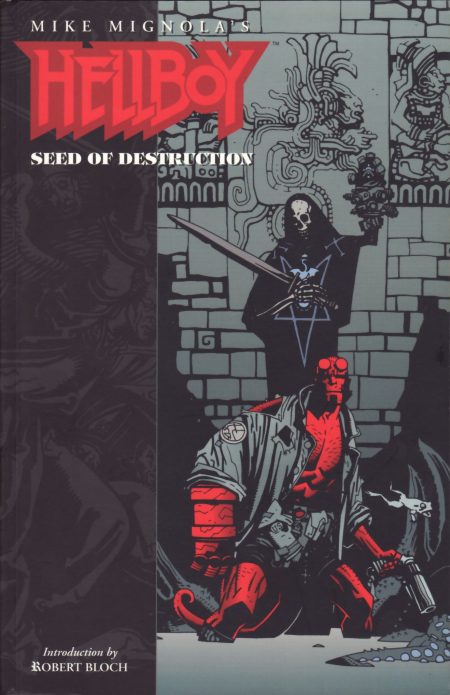 I’ve always loved monsters. As soon as I learned which end of the pencil to use, I was drawing them as fast as I could conjure them up. While the rest of my classmates were busy drawing cars or practicing their lay-ups, I was drawing hideous green beasts clutching blood-drenched skulls, rising out of mist-shrouded swamps. It wasn’t the Luke or Han figure I wanted, it was Greedo. It wasn’t the G.I. Joe Battle Tank I wanted for my birthday, it was Rodan with the 38” wingspan! Yes, if it had tentacles, leathery wings, or scales, I was all about it.

Which brings me to Hellboy. Or rather, Mike Mignola, initially.

I first became of fan of Mignola’s work while devouring his contribution to DC Comic’s ‘Elseworlds’ series, Gotham by Gaslight. In a gorgeously rendered Victorian-era Gotham City, the caped crusader, now sporting leather gauntlets and a layered cloak, chased Jack the Ripper, fresh off the boat from London, as he hunted his prey — both characters a study in inky noir. I was amazed by the amount of black on the page. Shadows dripped from every building, water tower, and cobbled street. I could easily credit this single book with my move to New York City years later.

You see, Batman had been my first love… one that I never imagined could be replaced. That is, until the bright red Hellboy jumped out at me from the rack of my local comic shop in March of 1994. The first issue of Seed of Destruction, Hellboy’s first real full-length comic, had everything I needed: Nazi occultism, creepy abandoned laboratories, Victorian mysticism, and yes, monsters. So. Many. Monsters.

Turns out, Mignola suffers from the same affliction that I do. While reading an interview years later I would discover that the main reason Mignola created Hellboy was that he wanted an excuse to draw monsters. Having grown tired of drawing superhero books for the majority of his career, as well as being heralded as a true “artist’s artist,” Mignola had the juice to create his own comic. And so was born Anung Un Rama, or… The Beast of The Apocalypse.

But it’s not all about the art. Mignola is truly a master at seamlessly injecting his grim end-of-days storylines (Ragnarok!) with a refreshing everyman sense of humor, (“Aw, Crap!” being our hero’s favorite exclamation in the midst of battle). Further, his ability to blend obscure folktales from around the globe with pulp comics and Victorian occultism while somehow infusing a sort of dark optimism is also a reason for continued reading. It’s just really f’n good.

…Oh, and did I mention the monsters?