Dark Shadows debuted in 1966 as a run-of-the-mill soap opera with gothic overtones, centered around a sinister New England mansion called Collinwood and the family who lived there. Despite the presence of former Hollywood star Joan Bennett playing the family matriarch, ratings were mediocre.

That all changed in April 1967, when, as the New York Times reported, “poor Willie — the handyman at Collinwood — discovered a secret room in the family mausoleum. In the room, a coffin bound with chains. Next thing you know, nosy Willie opened the thing and out shot this… hand!” Goodbye, Willie, and hello, Barnabas Collins, the elegant, conflicted vampire portrayed by former Shakespearean actor Jonathan Frid. Ratings took off, the Times noted, “like a rocket-powered bat out of, well, Collinwood.”

In his mid-40s, Frid was an unlikely teen idol, but there he was, nestled between the Cowsills and Bobby Sherman in the pages of magazines like Tiger Beat, 16, and FAVE! (exclamation point in title).

One Dark Shadows tie-in was aimed at still younger fans. According to its box, the Barnabas Collins Game (essentially a three-dimensional version of hangman, in which players pulled glow-in-the-dark bones from a cardboard coffin in a race to become the first to build a complete skeleton) was suitable for players aged 6 to 14. A Galveston newspaper’s roundup of children’s letters to Santa in December 1970, included 8-year-old Cynthia W.’s list, which began: “1. Easy Bake Oven. 2. Game Barnabas Collins.”

Cynthia was clearly a girl after my own heart. I too was part of the Dark Shadows’s tweenie fandom, and proudly wore the fangs that came with the Barnabas Collins Game. At age nine, the show’s campy erotica flew right over my head, but I tuned in for the adventures of Barnabas, Quentin (a sexy werewolf with his own memorable theme song), and Angelique (a witch once married to Barnabas).

Dark Shadows even provided the basis for my first attempt at zine writing, a project undertaken with my parents’ best friends’ daughters, all older than me by four or more years. I don’t know whose idea it was, but our parents were visiting and we were bored, so we decided to write a newspaper about the goings on at Collinwood. I remember sitting around the table in their knotty pine kitchenette using pencil on lined binder paper, drawing vertical lines to indicate columns. The girls had always been kind to me, but I remember their happy surprise that I too was a fan. That evening, as we worked on our paper, I had my first inkling of what it could mean to bond with others over pop culture.

The newspaper is long gone, but for Christmas that year, the girls gave me a boxed set of Dark Shadows novels. I think the adults were a little confused, but I was thrilled. The gift remains one of the best I’ve ever received — and it’s still on my shelf. 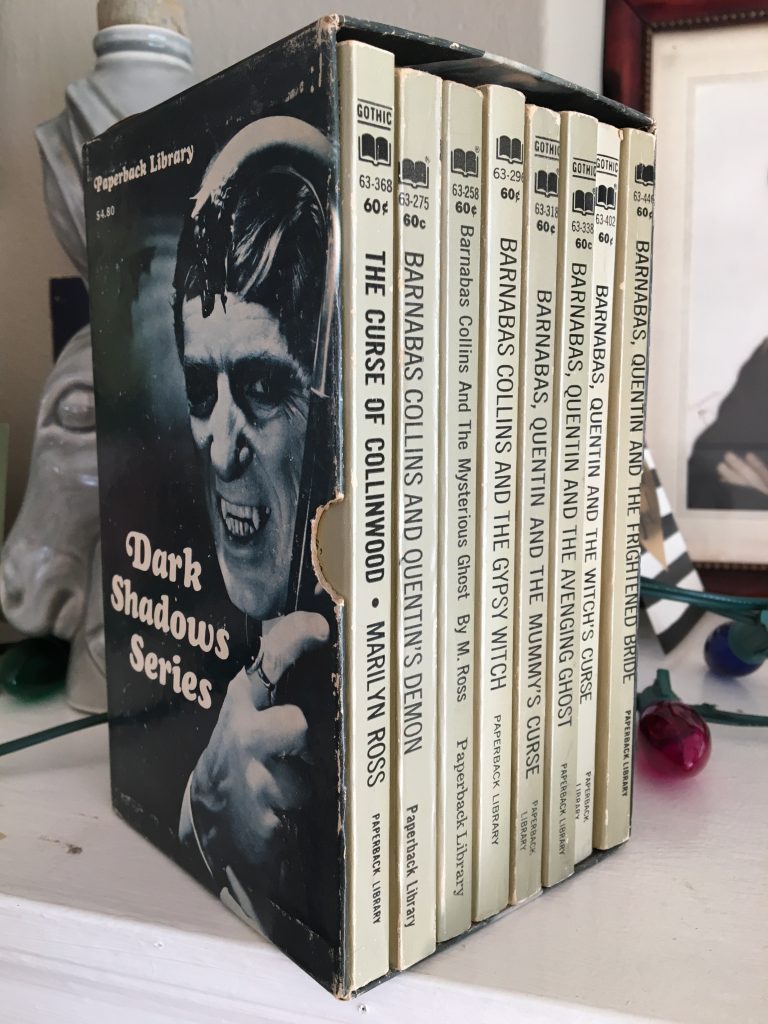