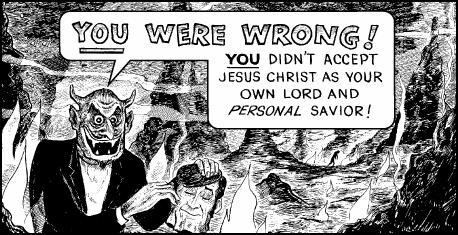 Satan first came to me in 1973, as I stared at a can of Underwood Deviled Ham. The imp on the label burned into my head and took command of the pain in my ear, which had been aching for days. He stabbed with his pitchfork at my inner canal until Mom took me to a hospital, where he was removed, though I was told it had just been my tonsils.

We met again the next Summer, when as Dad’s sidekick in sidewalk ministry I was assigned a stack of Jack Chick tracts to hand out. These Evangelical comix frequently feature the Devil, cackling “HAW HAW” with jutting chin in celebration of Sin’s triumph over modern mores. I absorbed them in a backseat inferno as Dad drove around downtown Louisville looking for foot traffic, listening to an A.M. apostle faith-heal callers over the radio. A distant relative with cancer had died despite his intercession, which posed less challenge to my fledgling Faith than that he had taken her money.

In The Contract, wearing tails and top hat, roué moustache and diamond pinkie ring, Beelzebub Fox tempts a hayseed into signing away his soul. Somebody Goofed has him as a bully who taunts a soft-brained kid into playing chicken with a train, in a Herb Tarlek-style suit that would have been enough to put anyone off. There could not be much to fear, I reasoned, from anything so easy to spot — which for me included those preachers on the air, who promised the afflicted miracles as they solicited donations.

But as with most things that amuse me, Dad sensed in this mortal peril. In no guise was the Beast a joke. His dark reign and the preceding Rapture were events for which Chick was preparing us, offering a cautionary catalog of ’70s blasphemy. New English translations of the Bible, in growing acceptance at the time, were a perversion of the King James Gospel. Computerized cash registers, credit cards and bar codes were groundwork for The Mark, the number anyone who skipped the Second Coming would have to accept in order to buy anything. Satanists were banding together in Christian rock bands and covens: Why No Revival? states “most churches have been successfully infiltrated by witches” as fact, supported by a footnote.

No doubt these comics are to credit for the strong interest I later developed in the occult, and my almost religious regard for technology. But revisiting Chick tracts today, I join my late father in finding little funny about them. For most of my 20s and into my 30s they were a lurid but cherished piece of personal lore, like the charlatans and charismatics who peopled the adult world for me as a child. But now, with some difficulty (and immensely expensive therapy) I see it doesn’t take Satan to make you a sucker.

See All Posts by Lisa Kahlden