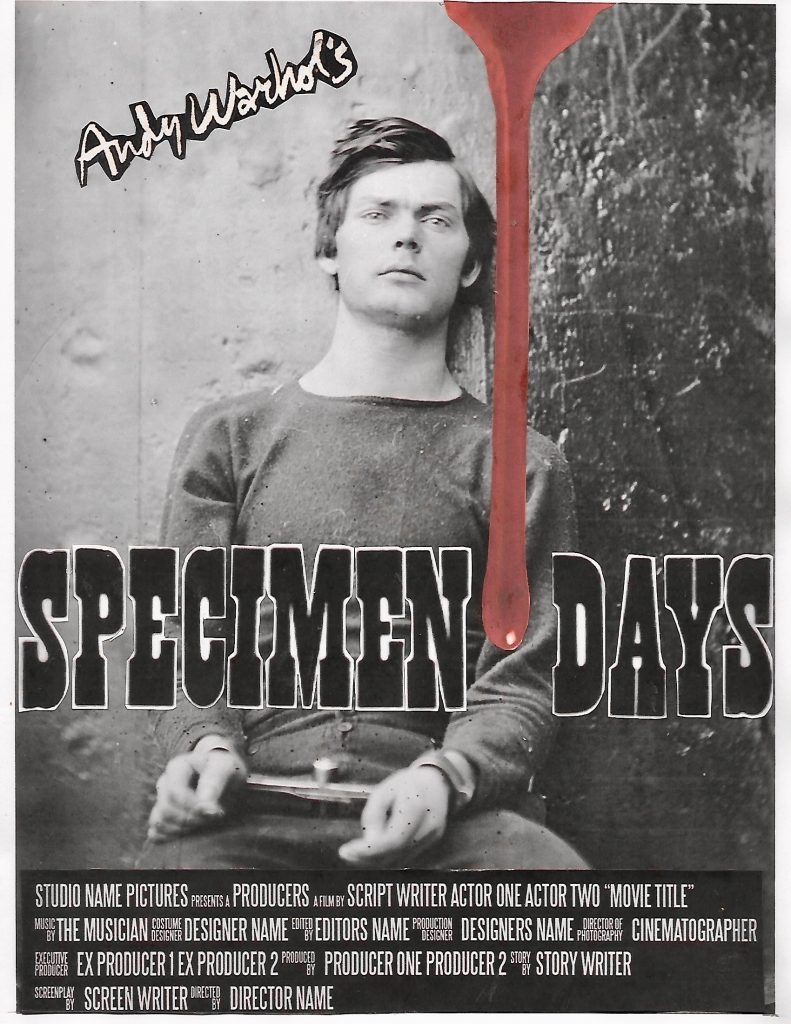 Collage by the author

In the fall of 1970 an item ran in a variety of publications, from Rolling Stone to the glossy earth-art magazine Avalanche, that in its terse and uncritical summary appeared to be an unaltered press release. Andy Warhol, it said, had received financial backing to make his first Hollywood movie, an adaptation of Walt Whitman’s Specimen Days. It would be shot in New Orleans. A search was underway for a lead actor — Allen Ginsberg, John Lennon, and Mick Jagger had all turned Warhol down.

And that’s it. The Avalanche citation is the only thing that comes up online when you search for “warhol specimen days.” The picture is unmentioned in contemporary books about Warhol, such as John Coplans’ (1970) or John Wilcock’s or Peter Gidal’s (both 1971). Although I haven’t researched the matter extensively, the film project does not seem to appear in Stephen Koch’s Stargazer (1973) nor more recently in Blake Gopnik’s doorstop bio (2020). According to every account, Warhol’s last picture as a director was Blue Movie (1970), which true to its name and nature was seized and buried and not shown publicly until 2005. Warhol, two years after his attempted murder, was in disarray, with only Interview magazine, which still looked like some hippie rag, as his single viable project. Maybe Warhol murmured the Specimen Days idea at a function where it would be overheard, and maybe he broached it in chatty phone calls with his putative stars, but it may never have existed on paper, let alone celluloid.

Nevertheless, Warhol did contrive the notion, however dimly imagined, of filming Specimen Days. What would that have looked like? I imagine Andy fixating on the wounded soldiers, rows and rows of them, each given a Screen Test-like extended closeup, all of them ragged and beautiful and wild-eyed — maybe from speed, but that could pass. I imagine his Walt framed stolidly by the lens as he speaks entire paragraphs of Whitman’s text, flat and uninflected. I imagine a set-piece at Pfaff’s, featuring all of Walt’s favorite coach drivers. I imagine plentiful breakings of the fourth wall — a rock band, miniskirted dancers doing the Frug, Ondine and Rotten Rita monologuing about what happened the night before at Max’s and who walked off with a favorite shirt without asking — all of this taking place in a vast nineteenth-century setting, maybe an armory with tall arched windows, in his version of the Inauguration Ball which was filled up with the wounded of second Bull Run and Antietam: “To-night, beautiful women, perfumes, the violins’ sweetness, the polka and the waltz; then the amputation, the blue face, the groan, the glassy eye of the dying, the clotted rag, the odor of wounds and blood…” It would be Vietnam, of course, and Andy’s memory of the bullets that entered him, and Freddie Herko’s suicide, and the nation coming apart at the seams. It would have been a signal movie of its time.