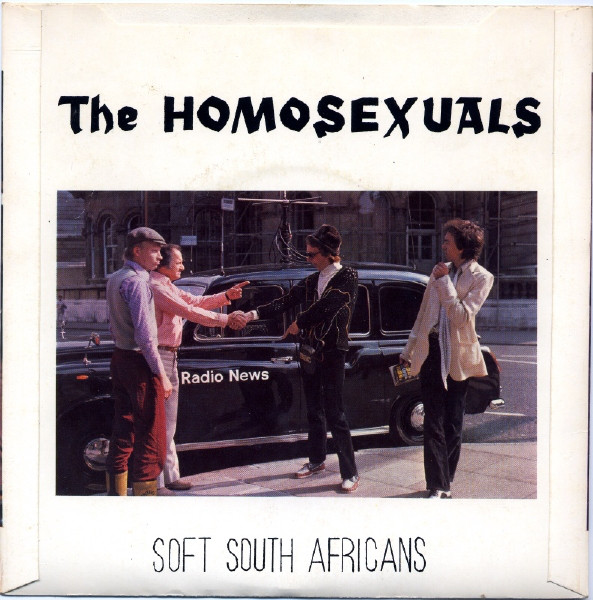 The Homosexuals kept as low a profile as any great punk band that left any evidence at all of their existence. In their original (late-’70s, London) incarnation, they were apparently written up in exactly one fanzine, once. They released a handful of singles and EPs, sometimes under pseudonyms; there was no Homosexuals album until years after they broke up, scavenged from disintegrating tapes. (A 3-CD catchall, Astral Glamour, came out in 2004.) They changed their name from the Rejects — which was entirely generic for that moment — to something that could actually have gotten them beaten up at the time. And they made some extraordinary music, maybe most of all this song.

There are no South Africans mentioned in “Soft South Africans.” There are, however, “soft diamond dinners with the Queen and her regiment,” according to the dot-matrix printout lyric sheet included with the single on whose B-side it was first released in 1978, so maybe “South Africans” is slang for the hardest thing that gets mined there. The song’s words are surreal, in André Breton’s sense; they hover around collective meaning, and scatter when you focus on them too carefully. “Status foetus sucks the Bishops breasts/Newed bicycles brought for Selection Test,” goes one couplet — the bishop could be paired with the queen, either in the Church of England or on a chessboard (and “ivory” and “ebony” appear at the beginning of the song’s first verse and near the end of its bridge), but “newed bicycles” suggests the naked bicycle race staged in London in 1978 by the band Queen — whose name makes basically the same joke-or-is-it as the Homosexuals’ name.

And so on. On its surface, “Soft South Africans” isn’t too far from some of the spots U.K. punk was sidling toward at the time. There’s a Buzzcocksian sneer to its lead vocal, some yobbish harmonizing and call-responding, a guitar break with “Can’t You Hear Me Knocking” and Thin Lizzy in its family tree, a beat that doesn’t quite aspire to disco but wouldn’t glower if you called it that. But everything about it is weird. The song’s main rhythm guitar part is a syncopated, stop-time riff that’s deceptively reconfigured every time it re-emerges; the bass dodges around it like a debtor. Then there’s a bridge where the band suddenly falls into punk rock lockstep while everyone croons and whines about fumes and steam and “wet odours,” until they hit a word that’s spelled, and pronounced, “ORGASMMMMmmmmm!” Whereupon they pull their initial riff back on, this time sideways, and spend a few more minutes sidestepping nervously around each other’s instruments, chanting “limbo limbo limbo” on their way out.