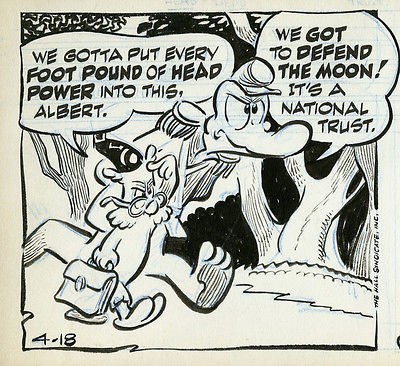 My grandmother was a puzzle to me, growing up. Marked by the Depression, her care for her family often emerged as criticism, and our visits there simmered uneasily at her corrective opinions. But my grandparents’ house had an isolated room of books where a hectored child could steal a layabout hour. The prize of this library was my grandmother’s collection — two whole feet of shelf-space — of Pogo books, dating from the 1940s to the 1960s. She even had a few rare issues of Dell’s Animal Comics from the beginning of the strip, where the animal characters still interacted with a young boy. I spent weeks inside those pages, collections of daily strips and one-offs where the strip characters took on Mother Goose, Lewis Carroll, Mickey Spillane, and much more. My enthusiasm didn’t actually bridge a gap with my grandmother — she was more concerned that the books not be damaged. But it did offer a glimpse into a sympathetic humor she found hard to express, something I feel even more now, looking back and realizing that she was collecting these books as a middle-aged woman with four kids. Hers is an emotional divide I associate with post-war America. It’s also something Pogo exploits as a source of endless foolishness.

It’s hard to know where to start with Pogo, a comic strip about animals living in Georgia’s Okefenokee Swamp. The material is both arrantly silly and satirically sharp. Walt Kelly’s insistent lampooning of McCarthyism takes a place next to The Crucible as far as artistic stands of the American 1950s, but political commentary is only a grace note to the fullness of this world. The detail and depth of the art, the whimsical quasi-Southern dialect (and spelling, and lettering), and the expansive range of characters (and characterizations) are equally singular. Kelly lays out a crackling music-hall sensibility of routines, equal parts word-play and slap-stick, self-consciously old-fashioned and slyly up to the moment. Though it’s impossible to imagine strips like Doonesbury or Bloom County without it, Pogo is like nothing before or since in the newspapers.

Pogo also offers an authorial sleight of hand where the interplay between jokes and satire — where the jokes come at a cost — somehow rises from a forgiving awareness of human frailty. Despite the darker nonsense, the baseline of the strip is the banality — and resilience — of goodness. Like the Okefenokee itself, Pogo the possum is often silent, often put-upon, taken for granted, ignored, and regularly too hospitable to the selfishness around him. But it’s Pogo the strip is named for, and it’s Pogo gamely seeing the antics through and talking sense afterwards.