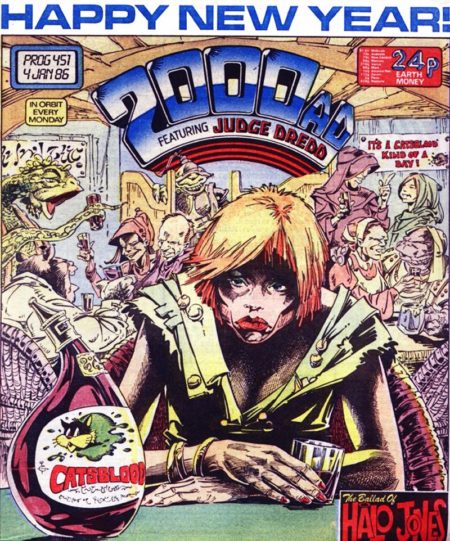 THE BALLAD OF HALO JONES

In 1987 my family left New Zealand for a trip back to my parents’ home country of England. It was my first exposure to the brutalist high-rise monoliths of the Chelmsley Wood council estates, grey, frigid days where the sun barely managed to struggle above the horizon, and the almost incomprehensible (to me at the time) Birmingham accent that only occasionally surfaced in my mother’s speech.

In hindsight, a baffling alien cityscape was the perfect environment for an eight-year-old girl to discover Halo Jones, the cult comic penned in 1984 Alan Moore with art by Ian Gibson.

Quarters were tight during our trip and my uncle kindly surrendered his bedroom to me and my brother. The room was a treasure trove of music posters, computer games (my chief memory of that trip to the UK is inextricably bound up with the clunky pixelated battles of Golden Axe) and most importantly a teetering stack of back issues of 2000 AD, the comic book in which The Ballad of Halo Jones appeared.

When we meet Halo she’s dreaming of escaping The Hoop and the meaningless cycle of shopping and pop concerts and Nice Guy cyborg dog stalkers she’s trapped in. To child me, The Hoop (a floating city tethered off Manhattan) was cool, holding the promise of the teenage wildlife I was still years off attaining. Why would Halo want to escape? Indeed, her best friend flakes out on her, content to leave her dreams as dreams, and Halo busts out on her own.

When I re-read the series as a teenager, I understood why Halo wanted to put The Hoop behind her, but I couldn’t understand why — after working as a poodle-themed spaceship cocktail waitress and shaving her head to fight in a horrific ultra-high-gravity space war, fitting in an unrequited lesbian crush plotline along the way — she ultimately rejected (and by rejected, I mean murdered) the Big Bad Space Mr. Rochester character in favor of solo adventure. Wasn’t being claimed by the Prince the end of the story? Who would need to escape the ultimate societal victory?

As intriguing as the plot is Ian Gibson’s lush, mannered artwork. I learned to draw legs and hands by copying pages from Halo Jones and Robo-Hunter, and the knack he has for capturing the key lines of naturalistic yet dynamic poses got me through many an art-school lifed-rawing class.

The story is framed in a similar way to Margaret Atwood’s The Handmaid’s Tale, with a class of far-future college kids learning about Halo’s adventures—and her “most famous quote,” Anybody could have done it.

A lot of words have been written about women’s empowerment in comics, but to me the message doesn’t get much more inspiring than Halo’s. You don’t need to possess any sort of super-powered exceptionalism to break free. You just need to walk out, and have the strength to keep walking.

2000 AD’s tagline for Halo Jones was no less inspiring to me, in a femme-Roy-Batty way: Where did she go? Out. What did she do? Everything.

See All Posts by J.E. Anckorn

J.E. Anckorn is a British/New Zealand author and Illustrator based in Boston. They write articles on gender, rock music, and why Fright Night is better than The Lost Boys for Cold War era pop culture magazine We Are The Mutants. They can be found arguing over the vampire-based life choices of strangers here.