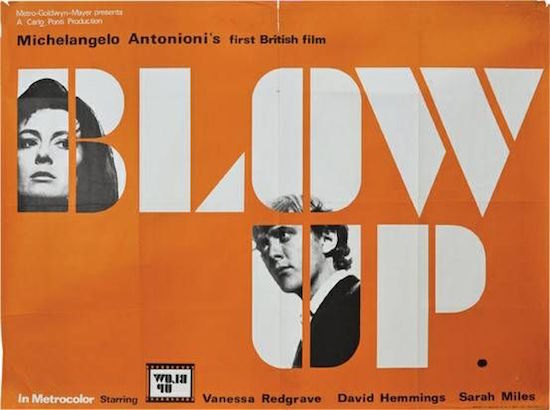 I saw Blow-Up for the first time on the 12-inch portable television set that sat on my bedside table throughout the latter part of my childhood. It was 1974 or so, and I was a tween with a raging crush on David Hemmings, the blonde-haired, blue-eyed English actor who starred as the world-weary photographer who may have witnessed the aftermath of a murder. I was familiar with Hemmings from another vehicle, the musical Camelot (1967), which my best friend and I saw multiple times during its 1973 rerelease. That was a sunny, somewhat dopey take on the Arthurian legend, based on one of my favorite books, T.H. White’s The Once and Future King. Hemmings played Mordred, King Arthur’s illegitimate son and a bad-boy disrupter whose antics leave the Round Table in ruins. Even so, there is a hopeful if not quite happy ending.

Blow-Up, on the other hand, left me completely confused. Did Thomas the photographer really witness a crime or was he just going crazy? David Hemmings looked hot in his white pants and chambray shirt, but other than that, I was lost. I’m sure that the cuts made for television didn’t make the convoluted tale any easier to follow.

Seeing the movie again in college, uncut and on the big screen, was a revelation. For one thing, it was in color, though the gritty cast of grays imparted by my black-and-white TV set worked so well that even now I remember it as the film’s natural palette. Nor had I recognized Vanessa Redgrave, Guinevere in Camelot, as the comprised and possibly criminally complicit woman seeking to destroy Thomas’s photos of her tryst in the park. I loved the mod fashions and, of course, the Yardbirds’ brief appearance, where Jeff Beck smashes his guitar as if he was Pete Townsend, and sends the previously still crowd into a violent paroxysm as they fight for the instrument’s broken neck.

I’ve seen Blow-Up any number of times since then, and have finally come to love it — and not just its star — as a gorgeous piece of eye candy that can be taken any number of ways. As a kid, I thought I didn’t understand the movie because I couldn’t come up with an answer to its central question. Now I consider not knowing part of the viewer’s pleasure.