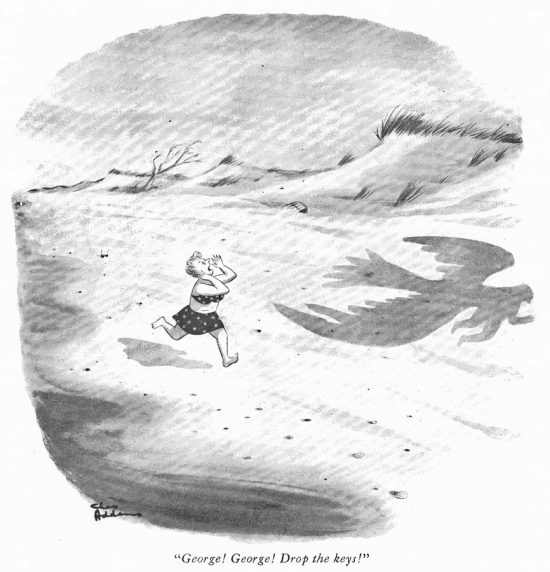 I inherited my sense of humor from my father, who shaped it Sunday by Sunday. It’s a dark humor, forever twined with child memories of church and Martin Luther’s frog face and hairshirts in the morning; and Charles Addams books cracked open on the carpet before my dad after dark, with me and my sisters crowding in for a closer look at the macabre distortions of the day to day and falling back in paroxysms of laughter — something we wanted to do but weren’t allowed to as we listened to stories about some guy wearing a close-cropped and highly abrasive animal pelt inside out until he bled.

Save for family picnics, which occurred between church and Charles Addams and which, to my endless disappointment, did not feature baskets full of dead bats and poison as Addams’ family outings frequently did, our Sundays were delightfully morbid.

It brings great joy to report that the man who contributed his cartoons to The New Yorker for more than 50 years, who had a significant influence on Edward Gorey, and whose timeless and irreverent take on life has helped me cope in Trumpworld was born on my birthday, January 7, in 1912. His third marriage, to a woman named Marilyn, took place in a pet cemetery, where he was buried in 1988.

What’s typically unseen in his cartoons is the source of both the horror and humor. We often (but not always!) have deniability when we laugh. When I asked individual family members to name a favorite Addams cartoon, there was eerie consensus across the half century since last we’d perused the artist’s collected works together. Two stood out: A beach scene with the shadow of a giant bird on the sand carrying something big, and a woman in a bathing suit chasing the shadow, yelling up, “George! George! Drop the keys!” And this one: Surgeons still wearing their masks, so that you can only see their terrified eyes, busting through the swinging doors of a delivery room. One sister became an ob-gyn and cracked up but demurred when I suggested she hang that cartoon in her waiting area.