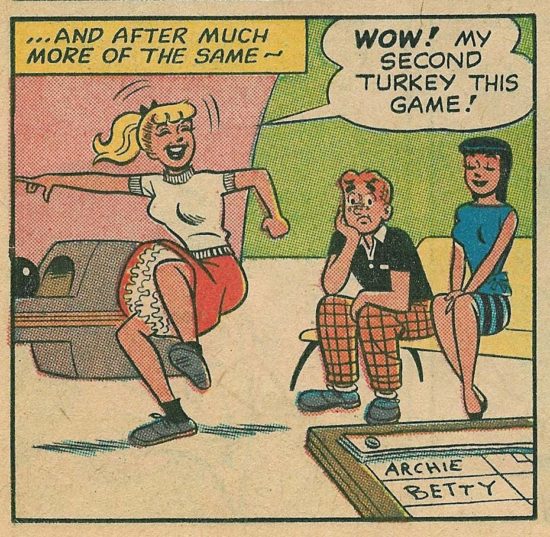 By the time I started reading the disintegrating stack of Archie comics at my grandparents’ off-the-grid Vermont cabin, the references were already outdated.

Archie Andrews was created by John Goldwater and Bob Montana in 1941 (though authorship, as in so many illustrated universes, is in some dispute) as an everyteen. Maybe my mother and her sisters, who bought most of the comics, had occupied that high school world. Hanover, New Hampshire, their hometown, still has a functioning soda shop within walking distance of Hanover High. But for me it was as distant as outer space … except for Betty. Betty Cooper was blonde like me. She had a ponytail like me. She was smart like me. Would I grow up to be a Betty?

In Archie lore, people say our red-headed hero never decides between Betty, the girl next door, and Veronica, the rich brunette vamp, but that wasn’t my perception of events. In comic after comic, Veronica swoops in for the clinch. She needs Archie. She pays for Archie. She drives off into the sunset with Archie. And Betty is there, holding the socket wrench, grease on her snub nose, having fixed that car. Maybe over Archie Comics’ 77-year history Betty did, once or twice, get her man. I haven’t read them all and I suspect no human could. After a while, the hijinks become numbing. How many times can Archie fall into Veronica’s pool?

I don’t have any of those dog-eared issues any more — like the cabin, they returned to nature — so for research I bought the digest The Best of Archie Comics. The cover lines (“The best stories of the past 70 years!” “Over 400 pages”) along with the chunky dimensions brought me right back. The best comic in the best-of is “Past Masters,” written by Dan DeCarlo in 1959 and showing the casual sexism that, thankfully, washed right over my small head.

The girls — except Betty — are failing history. “Betty, my mind just doesn’t retain anything! Not a ding-dong thing!” says Veronica, pivoting to gossip, in forensic detail, about a two-timing friend. Betty with a characteristic “EEEEK!” comes up with a solution: “You’re not going to study history! You’re going to gossip about it!” Betty, you see, has double consciousness. She turns Paul Revere into a boy who stays out too late, and Lafayette into a French heartthrob. She helps all the girls win. “Level with us, Betty! What’s the secret of your success?” asks Reggie. “Doin’ what comes naturally!” she says, the equivalent of a 1959 mic drop.

Betty loses Archie, over and over, but she’s never a loser. She doesn’t play dumb, or sulk in the basement. She doesn’t throw the game, or even bitch about Veronica. She has the satisfaction of her smarts, embodied by that bouncing ponytail, simultaneously practical and perfect. Maybe Archie is the one problem she can’t solve but, from the vantage of 2019, that seems entirely OK. Being good doesn’t have to feel bad.

See All Posts by Alexandra Lange

Alexandra Lange is the architecture critic for Curbed and the author of The Design of Childhood: How the Material World Shapes Independent Kids (June 2018).