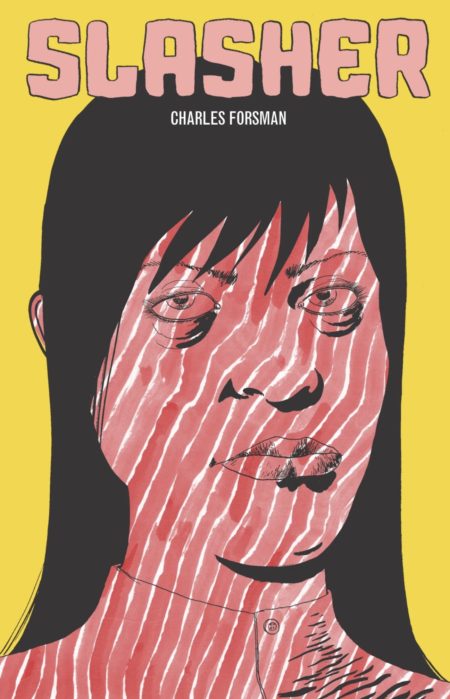 It’s hard to miss the cover of Charles Forsman’s 2018 graphic novel Slasher. On it, we see a knife. The handle is composed of the upper portion of a woman’s body clad in skintight black vinyl and her head concealed with a face-covering hood. Where her legs should be, there’s a blade dripping with blood.

Last year, I came across the comic book at The Secret Headquarters in Silverlake. I less remember spotting it on a shelf than I do falling into its pages. They are full of violent acts perpetrated by a woman named Christine who responds to getting sexually harassed and other bad events by cutting open her tormentors with a knife. There’s a subplot, too, involving a young man named Joshua who posts videos in which he cuts himself on a website called PornUp and who may or may not be the victim of Munchausen by proxy perpetrated by his mother. Narratively, bad things happen, oftentimes at Christine’s hand: people die, people are brutalized, people are terribly lonely. But for Christine, murder is self-affirming. “I’ve never felt so relaxed,” Christine texts Joshua after a fresh kill. “Like I’ve been holding my piss for 25 years. I know who I am now.” On one artfully composed page, she lies on her back while talking to her depressed mother, her body spreading across two panels as their outlines bisect her; even the act of rendering her is a violation of her. Is it bloodthirst that keeps driving Christine to kill — or is she simply #metoo incarnate? After all, it’s not just one act of sexual harassment that rankles. It’s every act that came before it, too. Christine, it seems, has had enough. As her killing spree becomes less discriminating, determined more by happenstance than personal vengeance, her slashings are rendered more artistically. In a quartet of longer, silent panels that run down a single page, we witness her stab-slice-spatter-spew method applied to another male victim. Christine is the female animus, unchained and armed, dangerous and beyond constraint. She’s women’s rage mobilized. Working against her biological imperative, she finds erotic pleasure.

Sadly, the tables turn for Christine, and she learns Joshua’s story is different than she’d thought. After a pair of tormentors disarms her, she rises from the grave, her face obliterated in dirt and blood. Near the end, our heroine sums up her story thusly: “Well, basically… I just got catfished and I can’t cum unless I see blood.” Ultimately, things don’t work out so well for her. How could they? When you’re a woman who gets off on violence, you’re shit out of luck when it comes to support. Regardless, Christine’s story is liberating. She wrested her tale from the hands of men, used a sharp object to carve out her space on the page, and found empowerment in auto-vivisection. As a woman, she’s built to give life. To reclaim its inverse is a revolutionary act.

See All Posts by Susannah Breslin

Susannah Breslin is a freelance writer.