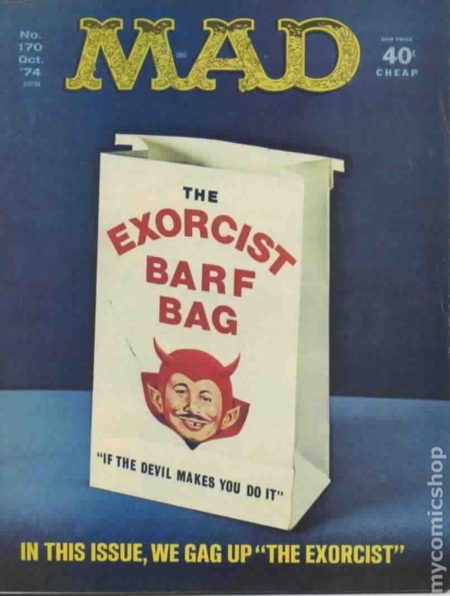 The key to comedy is the gap. According to an influential philosophy of humor known as The Incongruity Theory, comedy is defined by a gap: a disconnect between what we’re expecting and what happens. Suddenly, there’s an “Instant Hole” in the road; just as suddenly, we jump the gap with laughter. But while humor’s main reaction is physiological and involuntary, its main truth is conceptual: things are not as they seem.

Coming of age in the seventies, I lived in a small town with no movie theater. This was before we could put the blame on VCRs, and movies were a Very Special Occasion Treat. Even the ones everyone in junior high was talking about – hello, Jaws – I just hadn’t seen them. So when I discovered MAD, I devoured the movie satires as standalone narratives – they were entertaining in their own right, and their own right was all I had to go on. I especially enjoyed the brilliant work of writer Larry Siegel and illustrator Mort Drucker — who, in classics such as Chinaclown, The Oddfather, and Sleazy Riders, skewered films that were themselves subversive responses to a culture in revolt from received norms.

But what is it to encounter a satire when you haven’t seen the thing itself? I understood it as both telling the story and making fun of it at the same time – and I simply took that as the norm. Of course things were themselves yet also ridiculous, of course stories contained within them the seeds of their own destruction, or at least humiliation. To laugh at something is to disbelieve it, to pull back the curtain and perhaps see the confidence man. Of course that was funny! But it was also just the way it was. This was the era of Watergate after all, something even I saw on TV. Things were not as they seemed.

As humor hosts continuity gaps, so the standalone satires both contained and warned of reality gaps. I laughed while I learned to distrust the stories I was told. In this way, MAD movie spoofs were arguably as effective as actually seeing (and/or being old enough to appreciate) the social critique embedded in films like Network (Nutwork), One Flew Over the Cuckoo’s Nest (One Cuckoo Flew Over the Rest), Invasion of the Body Snatchers (Invasion of the Booty Snatchers), or Five Easy Pieces (Five Easy Pages… and Two Hard Ones) — thus allowing the satire to absorb the function of the thing into itself. It was gaps all the way down (and up). Maybe things, viewed through the gaps in the MADverse, were exactly as they seemed…?