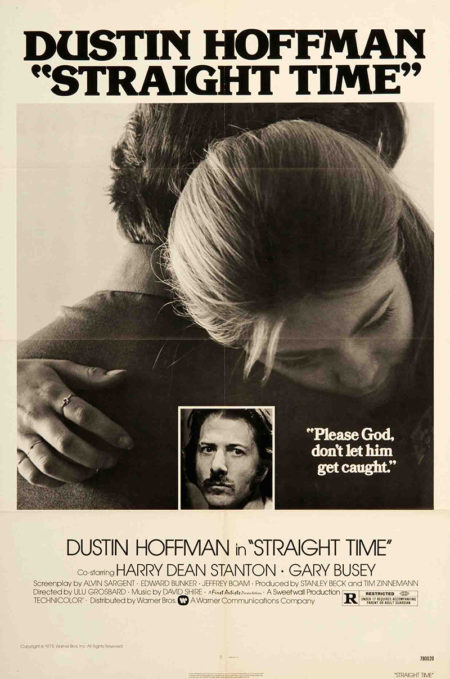 No need to get too fancy, or stint its obvious virtues: a taut crime story writ in a raw, scraped realism typical of the last flourishing of that great ’70s Hollywood style. A cast overspilling with texture and fascination — (early) Kathy Bates, (early) Gary Busey, (early) Theresa Russell, (prime) Harry Dean Stanton, (prime) M. Emmet Walsh. And Dustin Hoffman, for whom this was a passion project. Hoffman nursed the source novel — Edwin Bunker’s No Beast So Fierce — through development, and was originally slated to direct. He also sued for final cut after disputes in the editing room. His disenchantment with the result may or may not have soured the film’s prospects, or its residual aura, which could be so much bigger.

I got to talk onstage at the Brooklyn Academy of Music with the director, Ulu Grosbard. I adore a later film of Grosbard’s, too, Georgia, but it was Straight Time I’d watched dozens of time and wanted to discuss. A film about obsessiveness, Straight Time breeds it. The film’s producers had panicked at Hoffman’s cost and time overruns, after months of preproduction and a difficult start to shooting with Hoffman as director. Hoffman, under pressure, invited Grosbard, with whom he’d worked in a stage production of Mamet’s American Buffalo. I asked Grosbard whether any of Hoffman’s footage made it into the final cut. He chuckled, and explained that Hoffman hadn’t progressed past the pre-credit sequence, showing his character’s release from prison.

Well, bingo. Straight Time’s centerpiece is the broad-daylight jewel-store robbery, the big score Hoffman and his gang attempt, following the collapse of his attempt to navigate the straight world. Hoffman’s character screws it up (just like he’s blown parole) because of control issues: he stays too long in the jewel store, trying to gather up every stray diamond. The concurrence of actor, character, and situation is what makes this film Hoffman’s most honest confrontation with what separates him, again and again, from those who surround him on screen: his unsatisfiable perfectionism, and irreversible, hair-trigger rage.

There are so many great scenes, but the other I’d draw to your attention is Harry Dean Stanton’s self-recruitment from the ranks of the reformed. Mired in suburban comfort, he pleads with Hoffman to draw him back into a life of crime. “Get me out of here,” he whines. “They’re killing me. I can’t make this scene anymore.” It’s a perfect precursor to his line in Repo Man: “Look at these assholes, ordinary fucking people. I hate ’em.”

See All Posts by Jonathan Lethem

Jonathan is author, most recently, of the novel A Gambler's Anatomy.