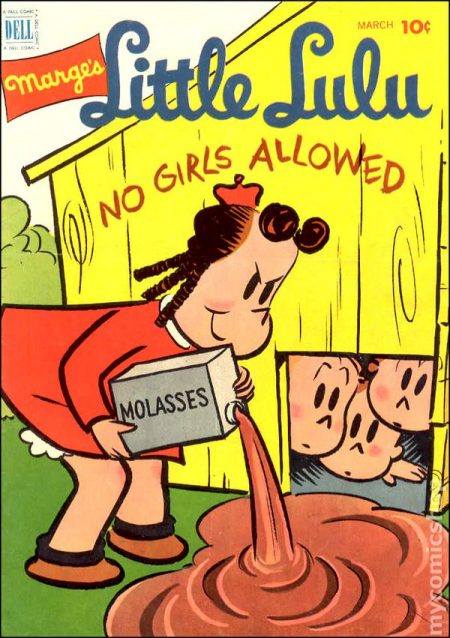 My grandparents had a cottage on an island in a river. In the cottage was a room with a single bed, and under the bed were several boxes of comic books, mostly from the late ’40s and early ’50s. Chilly Willies, Andy Pandys, Disney comics (heavy on the Scrooge McDucks), some old MADs, a Pogo or two, and lots and lots of Little Lulus. No superheroes.

The comic book room was usually claimed by an older sibling or cousin. When bedtime came, I would retire to one of the bunk-bed rooms with a small stack of Little Lulus — my favorite. I was imprinted, pre-literacy, with her banana curls and red triangle dress, the upturned wedge of her nose. All the possibilities of reading existed in the expressive range of her mouth: upside-down u of doubt, sideways half-moon of delight, black circle of surprise.

The Little Lulus were everyone’s favorite, part of our vernacular, our ongoing project of building a collective memory. Like the patched Fiesta bowls and the spoon jar ritualistically covered in Chiquita banana stickers, the striped towels draped over the rail of the footbridge, they belonged to the world of the cottage. I learned at some point that it was my grandfather who bought them — not my aunt and uncle, who would have been around the right age when they were new. He got them at a newsstand on his way home from the office. He confided to one of my cousins that he felt Little Lulu was him. Of course, Lulu is the audience stand-in, but my cousin and I nodded when she told me this, acknowledging a deeper truth.

We interrupt this memory for a theory break. “Some of the purest examples of irony,” James Wood says in How Fiction Works, “are found in children’s literature.” He gives an example from Make Way For Ducklings, when Mr. Mallard sees a swan boat in the Public Garden. “Just as they were getting ready to start on their way, an enormous bird came by. It was pushing a boat full of people, and there was a man sitting on its back.”

It is exactly in that opening — the space between naiveté and sophistication — that Little Lulu operates. Tubby’s crystal ball is a glass doorknob. Spirited treasure hunts lead to gold-painted rocks and exclamations of “phooey.” Some of the most indelible strips are the ones in which Lulu spins hep fairytales for Alvin, her bratty neighbor, who worships her imaginative power.

I think my grandfather’s easy identification with Little Lulu came from the fact that childhood is the invisible set point. The interplay between fantasy and reality is native and unremarkable. You even forget that they are children until Lulu shows up pushing her dolly in a carriage, or points out that Annie hasn’t learned to read yet, or — in a moment of frustration — sits down on the sidewalk, her mouth a sausage of misery, and says, “BAW!”