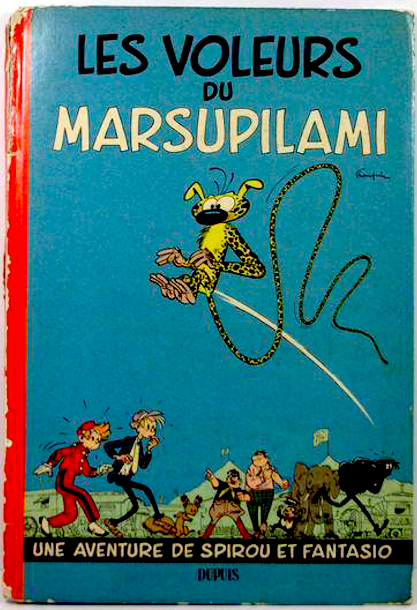 I wanted to be a cartoonist from age 4 until my teens. Small wonder, since I was born in 1954 in Belgium, which is to say one-third of the way through the Golden Age (1947–1969) of Belgian comic weeklies. Cartoonists were stars on the world stage, and they were also miraculously local. There were three magazines that mattered: Tintin, Spirou, and the Franco-Belgian Pilote, associated primarily with Astérix. The one I subscribed to long-distance, ages 8 to 18, was Spirou, home of Lucky Luke, the Smurfs, and the flagship titular series. That had been around since the ’30s, the gently madcap adventures of bellhop Spirou and his pet squirrel, Spip. When André Franquin took over drawing it in 1945, though, the tone changed completely.

Franquin was a master of chaos. Every panel is an explosion, with bodies and sound effects hurtling across in a broad arc accompanied by flurries of motion lines and followed by clouds of dust. Franquin could do animation on the printed page better than anyone, turning out panel sequences — slapstick car chases, for example — that somehow pack into their frames all the dynamism of the filmed equivalent. His backdrops are as rigorously, three-dimensionally material as his characters are stylized and frantic, all skinny flailing limbs. He quickly took the series from modest situational humor to crazed B-movie plots calculated to generate the maximum amount of running amok. The puckish Spirou — still in his bellhop uniform, if no longer so employed — and his cousin, the harried magazine editor Fantasio (along with the highly opinionated Spip) set out to solve international crimes, chase down mad scientists, and test advanced and highly dangerous gizmos. In 1952, deep in the Amazonian jungle of Palombia, following one of the challenges in Fantasio’s uncle’s eccentric will, they fatefully encounter a bulbous-nosed, leopard-spotted, tree-dwelling critter with a tail eight meters long: the Marsupilami.

This animal is, naturally, an agent of chaos. It is generally affectionate, but can fly into volcanic rages, and then, fur bristling, it displays disproportionate strength. Its remarkable prehensile tail is always in play, serving variously as a spring, a wheel, a lasso, a fist, a fishing rig, a grappling hook, a battering ram, and a sort of cherry-picker, elevating the Marsupilami above the tree canopy for observational purposes. In its native habitat, the tail functions primarily like one of Tarzan’s vines, to swing from tree to tree. Wrapping its tail around a lamppost from a moving car, the Marsupilami can cause the car to corner without slowing down. Its tip nevertheless has the delicacy of a finger, and there are discreet allusions to its significance in the erotic life of the beast, which like the platypus is a monotreme — a mammal that lays eggs. Its vocabulary consists of one word, houba, which can however take on an encyclopedic array of meanings.

If Belgium is to endure as a nation, it would do well to jettison the Flemish lion and the Walloon rooster and instead adopt the Marsupilami as its heraldic animal. It would look superb on passports.