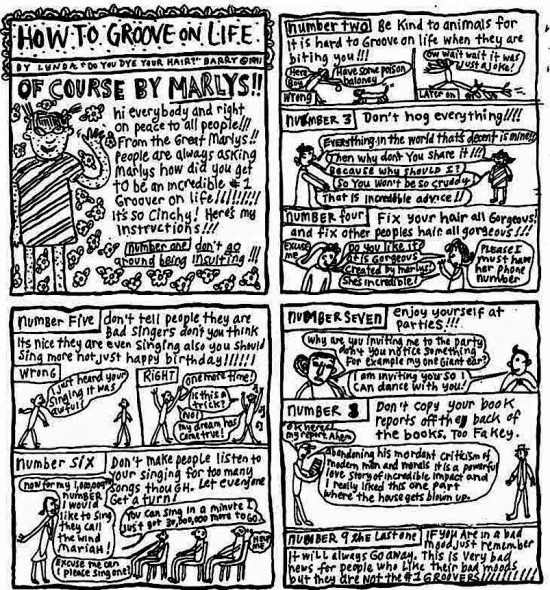 I’m a perfectionist, but not the beautiful kind. The kind that is mostly messy and hideous. The kind that prevents you not only from finishing things, but from starting them. The kind that whispers you have no business making any line or brushstroke or combination of words on paper because whatever you do will inevitably be less than you imagined it could be.

Lynda Barry is not like me. Lynda Barry — whose Ernie Pook’s Comeek ran in alternative newspapers from 1979–2008 — is the patron saint of the beautiful mess. She won’t hesitate to cross out letters, doodle on top of existing lines, make odd shapes to fit the available space. If she starts to write “NUMBER 3” and her brain is moving faster than her fingers and she makes the B before the M, Lynda Barry won’t crumple up the paper in a rage and go get in bed and look at things on her phone and not make a comic anyway because why bother? Lynda Barry will just cross out the B and keep going. You should too.

When I was growing up, there were two kinds of awkward girls: the blissfully unaware and the painfully self-aware. As the latter, I could not never understand why those other sort of awkward girls weren’t utterly mortified all the time, why they didn’t keep quiet or small or out of the way of the people who had things easy, the people who never spilled food on themselves or had weird hair or pimples or whatever it was. Even worse, why they walked around acting like they were soooooo cool when it was so very clear to everyone except them that they were not. Molly Shannon’s Mary Catherine Gallagher on Saturday Night Live was one of those girls. Marlys was another. I found those girls excruciating, the girls who sang loud when they couldn’t sing.

See All Posts by Judith Zissman