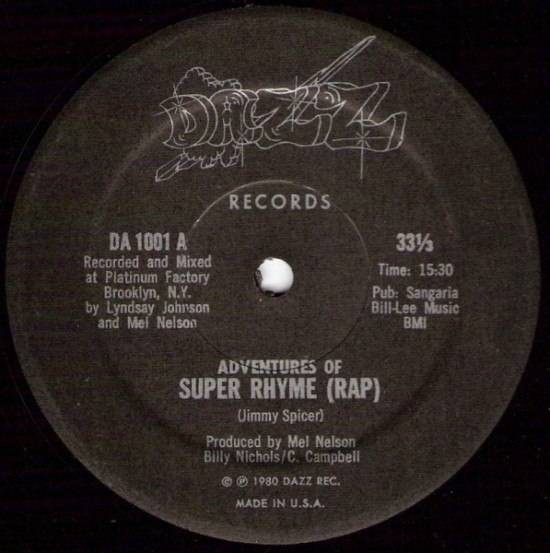 Fifth in a series of posts analyzing and celebrating old-school hip hop.

Jimmy Spicer’s “The Adventures of Super Rhyme” is among the most original and least appreciated early rap records. Spicer’s fun fourteen-minute track includes three discrete narratives interspersed with a miscellaneous grab bag of solid brag-lyrics and call-response instructions over a generic disco beat.

The track begins as a brag by Super Rhyme from Planet Rhyme-on. After explaining his cosmic origins he demonstrates his skills by telling two stories about fellow imaginary personages, Dracula and Aladdin. These stories are framed by Super Rhyme’s interaction with legendary broadcaster Howard Cosell, then 62 years old.

…So I rocked the party, vicious-ly! This guy I didn’t know walked up to me.
But the closer he got the more I could tell, it was the man they call Coward Hosell —
The guy you see on KBC while Joe Frazier box Muhammad Ali.
He said, ‘Excuse me, sir, are you Super Rhyme, the one with the fine woman, Lois Line?’ [note: Worst Cosell impersonation imaginable]
I said ‘I am! Will I be on TV like the float-like-a-butterfly-stingin’ Ali?’
He said, ‘Yes, my man, if you show me you can — I was told you had the master plan!’
So I rocked the mic for Howard Cosell to show America how I rock so well…

After Super Rhyme rhymes his story about Dracula (in Dracula-voice), Hosell/Cosell replies “Damn that’s good! You’ll be on TV in every neighborhood./He said, ‘Super Rhyme, you’re a real MC, we must put you on KBC.’” Spicer’s Hosell/Cosell is a rapper himself.

Muhammad Ali’s famous word play probably influenced early rappers. But if Ali’s influence is accepted, then Cosell, with whom he often shared the camera, must also be recognized as playing some kind of obscure role in the pre-history of hip-hop. Brooklyn’s own Cosell was a non-conformist, eccentric, do-it-yourself broadcaster before elbowing his way into the mainstream. Once there, he was the first in the sports establishment to stop referring to Ali as “Cassius Clay.” Much more than a boxing commentator, Cosell was a ubiquitous figure in contemporary culture, writing columns and hosting Monday Night Football, Wide World of Sports, and Battle of the Network Stars.

Spicer’s Cosell transitions from commentary on athletics to aesthetics. Spicer casts him as an arbiter or validator of rhyme skills, thus also highlighting the sport-like and competitive nature of rap. A Cosell character would serve a similar purpose on at least one more song, “Flipmode Squad vs. Def Squad” (1996).

See All Posts by Paul Devlin

Paul Devlin is the editor of Rifftide: The Life and Opinions of Papa Jo Jones as told to Albert Murray (University of Minnesota Press, 2011). He has written for Slate, The Root, The Daily Beast, BOMBlog, the San Francisco Chronicle, and other publications. He also wrote comparative study of Hemingway and Wittgenstein.