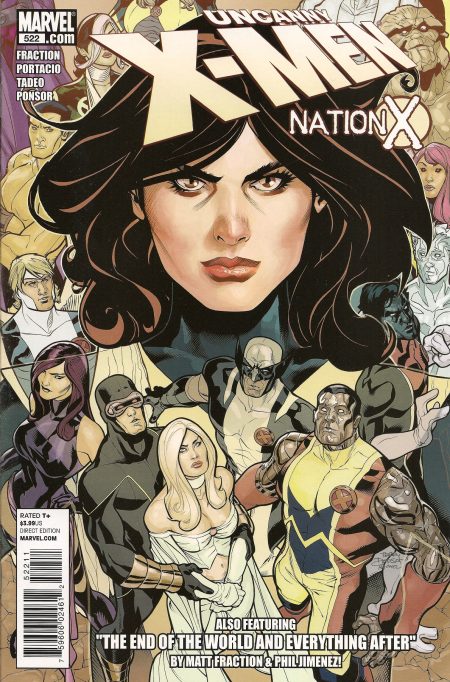 Between 2004 and 2008, Joss Whedon, of Buffy the Vampire Slayer fame, wrote 25 issues of Astonishing X-Men, with beautiful, painstaking pencils by John Cassaday. Like most of Whedon’s output, it’s witty, exciting and well-paced; it represents strong women who talk to one another; and it can reflect an uncomfortable male gaze. Whedon has said he built Buffy as an homage to the X-Men’s Kitty Pryde, the headstrong, insistently likable, science-fiction-loving, Jewish American girl who joined the X-Men at thirteen, and whose chief power is turning intangible (phasing). Kitty was often the only teen among adults, avid for peer approval she rarely received. Some readers who grew up with her character in the 1980s developed big crushes; others simply saw ourselves in her, especially since she was often coded bisexual, her power set a figure for the closet, or for queer erasure.

Whedon’s last plot sent the X-Men into space, where aliens fired a giant missile at the Earth; in order to save our planet, Kitty turned herself and the missile intangible… and could not ever change back. Whedon had condemned his favorite character to hurtle through deep space, attached to a big steely phallus, as if to say no future writer could play with his toy.

Enter M-Day, the disaster that disempowered most mutants in Marvel comic books; enter Utopia, the island haven the X-Men built for the mutants who remained. Enter Magneto, the former villain who long saw himself as defending mutants from humans, and who saw — having survived a Nazi death camp — the worst that humans can do; enter, too, writer Matt Fraction, experienced X-penciller Whilce Portacio, inker Edgar Tadeo and colorist Justin Ponsor.

Uncanny X-Men 522 (March 2010) begins with Kitty still inside the missile, in panels all faded and grey: “All she had to do was to keep it together forever and ever until she died.” Then the color scheme shifts to Magneto’s vivid reds and purples, in space (where he detects “metals in her phantom body”) and then on Earth. He levitates, cross-legged, eyes closed. Other X-people realize he’s used his magnetic powers to turn the missile around.

Magneto nearly kills himself with the psychological effort: close-ups show nosebleeds and crackly energy lines. He’s thinking — and other mutants are thinking — about safety, and sanctuary, and belonging. Who deserves it? What preserves it? Who gets it, and when?

“Either she’s coming home and it all works out,” team leader Cyclops concludes, or “the bullet is headed for Earth, and we’re all dead anyway, right?”

And then Kitty touches down, in something like fetal position, perhaps in shock, but on Earth. Magneto speaks: “Du bist tsu dar, tzatzkeleh.” “There you are, Kitty.” In Yiddish: the language of people the Nazis tried to destroy, the language that connects Magneto, and Kitty, and the very idea of survival after all seemed lost.

She has to go into a tank for medical observation (it’s happened to her before). She won’t be solid for a while; she can’t touch her sometime boyfriend Piotr, or anyone. But she’s home.

Uncanny X-Men 522 isn’t just a beautiful superhero comic (though it is). Nor is it just one with uncommon visual variety (though that too: expressive faces, crowd scenes, fiery interstellar trails). It’s a signal to Kitty’s fans — especially, perhaps, to the closeted ones, to those in bad shape, who can’t go home, or can’t leave a harmful home. If a favorite character can come back like that — with help — when it once seemed impossible… reader, maybe you can too.