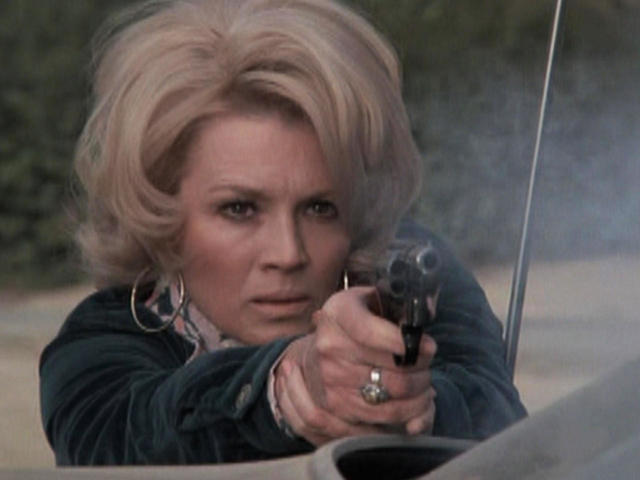 Police Woman was Angie Dickinson, and in that era of cop shows with gimmicks, hers was that she was a woman. Sergeant Pepper Anderson was a regular cop, tough as nails, always ready to barrel-roll out of her car and come up armed, ready to deliver urgent orders via walkie-talkie, ready to collar the crooks. And she was also ready to feel, and that was her super-power, unavailable to the male flatfeet that surrounded her. She could commiserate with victims and gently urge them to talk; she could negotiate with unsteady criminals who might be persuaded to drop their weapons; she could make guesses about suspects’ possible next moves based on knowledge of their personalities. She also got upset, and needed a hot bath and a drink after somebody got killed, but that never intruded on her duties.

It didn’t hurt that the former Angeline Brown of Kulm, North Dakota, was also a looker, evergreen even for the time — she was 42 when the series launched. By then she had amassed an extensive list of TV credits in addition to a parade of bad-ass movie roles — in Howard Hawks’s Rio Bravo (1959), Don Siegel’s The Killers (1964), John Boorman’s Point Blank (1967), and a bit later Roger Corman’s Big Bad Mama (1974), in which she had several nude scenes at the then-unthinkable age of 43. She was bad-ass from the get-go, famously the only female member of the Rat Pack, who tended to be cast as characters with names like Feathers and Lucky Legs, who could hold her own with the fellas in drinking and gambling.

Police Woman, the very first cop show with a woman in the lead, was a cut above the competition in other ways too — the action was persuasive and efficiently edited, and you seldom got the feeling, prevalent elsewhere, that the drama was being resolved a bit too neatly in order to fit a 49-minute slot. Pepper was flanked by men who knew their business but nevertheless depended on her: big lug Earl Holliman (whom you might remember from The Big Combo and Forbidden Planet) on one side and broken-nosed Charles Dierkop (as the undercover street person, who tended to be white in those days) on the other. Even though I lived without a TV set during the show’s run, I seldom missed an episode. I was in love with Pepper Anderson, but in retrospect it seems clear that I also wanted to be her.