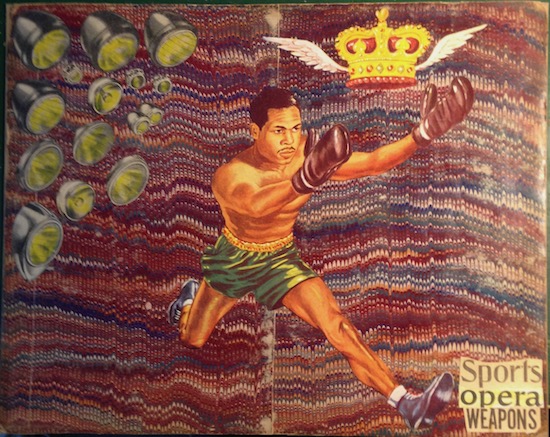 Archie Moore chasing his crown came from a cover of The Ring magazine from 1952, the year he finally won the middleweight title after a decade of being shunted around and ignored by the boxing establishment. I’m not a huge boxing fan but I have particular love for Archie Moore, his personality well rendered by A. J. Liebling in “Ahab and Nemesis” (in The Sweet Science, 1956). What got me especially, though, was how much the image made me think of Jean-Michel Basquiat. There was his crown! So I thought of making a collage that would evoke Jean. That was a tall order. I couldn’t imitate him, of course, even though there is a large collage component to his work. I had to meditate upon it for a considerable while. Finally the nineteenth-century endpapers came as a painterly element, and then the headlights, from a Montgomery Ward catalog, which I colored yellow — they made me think of the narrator’s “hole” in Ralph Ellison’s Invisible Man, with its 1,369 lights. The piece needed text, because Jean almost always had text. “SPORTS OPERA WEAPONS” seemed right — it’s from his 1981 painting “Plush Safe He Think.” That prompted a weeks-long hunt for those three words, roughly the same size. I’m not entirely happy with the way they turned out, but I could not find all three words in a headline font. Maybe someday I will, and can revise the piece.