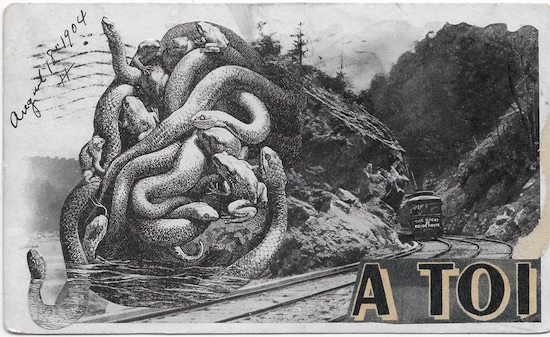 Here is yet another example of images from across space and time finding love matches in the ether. I’d had the postcard — a 1904 view of the scenic railway at Niagara Falls — probably since I was in college, when I’d buy old postcards now and then randomly for a dime. The ball of snakes and frogs came from an 1878 Harper’s Monthly and the “A Toi” was the title of the advice column in a French romance-and-fumetti magazine from the early 1950s. They all met on my work table and became something none of them individually could have imagined. It didn’t even occur to me right away that I had somehow engineered a particularly poisoned greeting card.